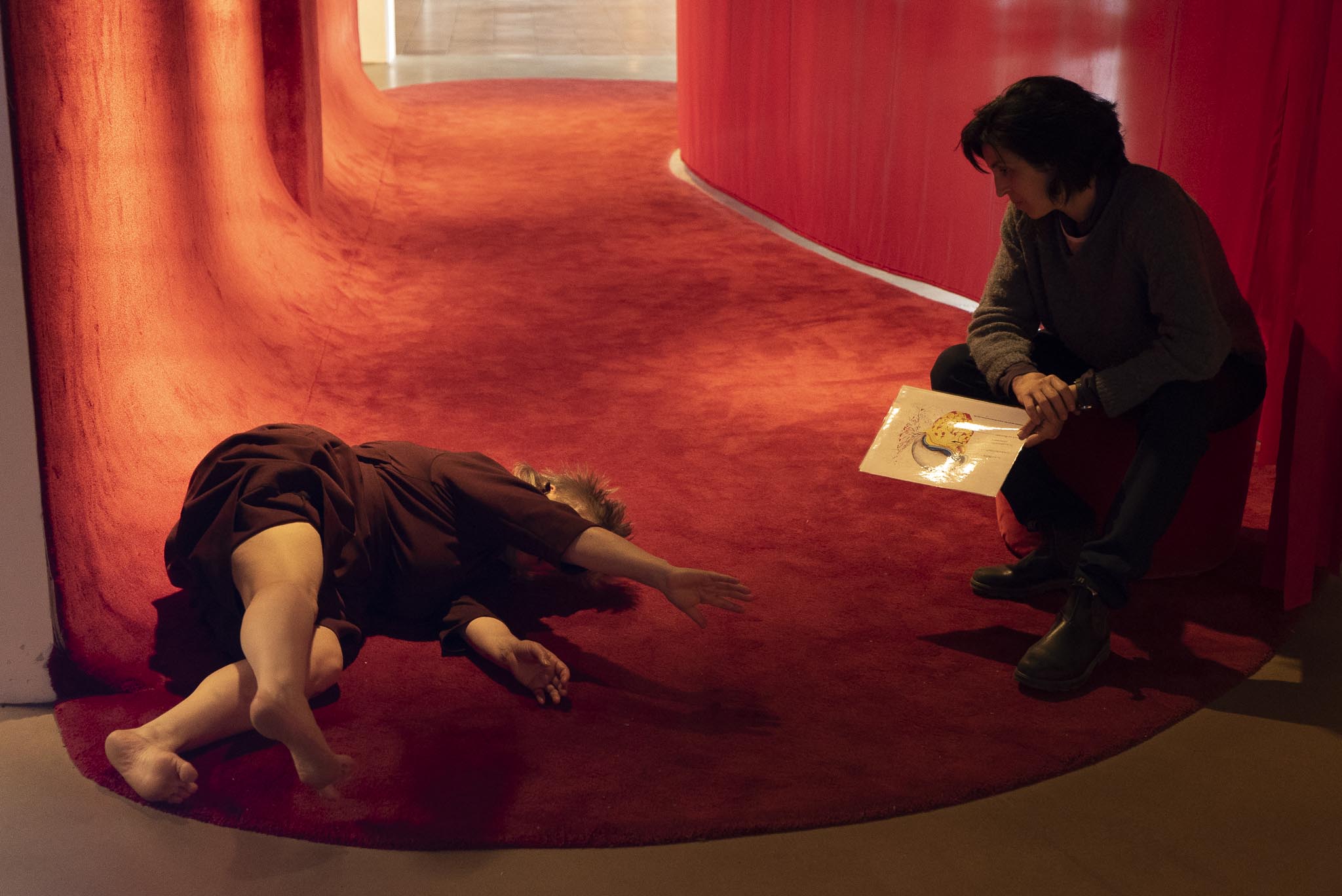 By Olive BieringaSeptember 11, 2022February 8th, 2023Blog, Press for a collection of fluid spaces
No Comments

A couple of weeks ago, I saw “a collection of fluid spaces”, a performance by BodyCartography. Not having planned to review this work, I found myself wondering about dancing embryos and the right to abortion, before getting lost in a strange somatic fantasy.

a collection of fluid spaces

Last Fall, after we had decided, as a group, how to die, I practiced doing so on the grass and mosses of the Bygdøy forest in Oslo. While I preferred drowning, the collective had set their minds on a freezing end. I remember lying on my back in the dappled light of the late afternoon, surrounded by strangers––not strangers after all––and feeling close to earth, close to death.

These are loose memories from Resisting Extinction, a performance by BodyCartography which attempts to contemplate grief in times of ecological crisis. It is with these thoughts in mind that I walk into Life & Death, the new permanent exhibition at Nasjonal Medisinsk Museum, a part of Norsk Teknisk Museum. There, I encounter a collection of fluid spaces, which BodyCartography describes as a ‘radical embryology laboratory’ and which investigates the notion of ‘embryological embodiment’.

BodyCartography has been producing performances, installations and Rlms for over 20 years and functions as the framework for a long-time collaboration between artists Olive Bieringa and Otto Ramstad. As certified Body-Mind Centering (BMC)* teachers, their work investigates socio-political relations between somatic practices and dance, and could be best described as ‘site- responsive’.

Connecting to the memories of our own embryological movement patterns – it feels quite abstract, almost wacko. It makes me think of BMC-classes I took during my dance education and how, even though I enjoyed the ways it opened up my moving, I had no idea if what I was feeling or doing was in line with what the teacher was talking about. Creating dance from your kidney? What does that even mean? Only later did I begin to understand that using biology and anatomy as a point of departure for movement and creation is not about getting the hard science right, but about finding new ways of imagining the body and approaching science from a different angle – as if it could be poetry.

We use imagination to visualize what cannot be seen. I can learn about my organs and my bones through anatomical illustrations and models, but I will (probably, hopefully), never hold my lungs or my heart in my hands. This tension between what is visible and invisible is a strong presence in a collection of fluid spaces. We see a person lying down on a table. Next to her, another person is hunched over, eyes closed, touching the Rrst body as if she was reading it. There is something about observing an act of concentration and the bodily relations it invokes. As if looking at this level of concentration directly affects my breathing, my brain, my senses. Like watching trees. Meanwhile, red surfaces and fabrics are animated by dancers, and a soundscape, vaguely tracing my idea of sounds heard in a womb, fills the room.

At the beginning of a collection of fluid spaces, we hear from the speakers a text about the history of anatomy and the place of embryology in it. It is quite short, but draws beautiful parallels between the history of the discipline and our knowledge about human life today. The text starts with a Latin inscription which can be found on the wall of the autopsy room at a local hospital in Oslo, as well as in the oldest anatomical theater in Padua, Italy. It says: ‘Hic est locus ubi mors gaudet succurrere vitam’, or ‘This is the place where death delights to help the living’.

I see a collection of fluid spaces on April 30th. Two days later, a draft opinion by the U.S. Supreme Court overturning the federal right to abortion, is leaked. For a while, and specifiically since my own pregnancy two years ago, I’ve been watching closely the rise of the anti-abortion movement in both the U.S. and many other countries, and how this has affected legislation and womens access to safe abortions. When I read that pro-life activists are awaiting female Ukrainian refugees at the Polish border in order to convince them to continue unwanted pregnancies, I feel a physical pain in my stomach. When I hear the voices of activists screaming ‘Murderers!’ to women entering abortion clinics, I feel blood rushing through my body just from rage. When they hear ‘embryo’, they think ‘life’. When I hear ‘embryo’, I think ‘abortion’.

As a branch of science, embryology has long been marginalised by the medical sciences, we learn from the text in a collection of fluid spaces. It was not until the mid 19th century that this specific part of human development gained attention. As a result, ‘doctors exploited the new knowledge to discredit the experience of midwives and pregnant women, and to argue that abortion should be outlawed.’

That last sentence catches my attention. It’s talking about progression, while revealing ‘other priorities’. Instead of using the acquired scientific knowledge to help women and midwives in every stage of pregnancy, including the stage of natural or invoked abortion, the newly developed illustrations and models of the developing embryo and foetuses seemed to function first and foremost as proof of life, as a proof of ethics, shaming women into carrying out their pregnancies, even if they had not wished for them.At some point in a collection of fluid spaces, the audience is guided into the exhibition where we blend in with the regular visitors of the exhibition and the objects there. The dancers show us images depicting different stages in embryological development, while also using voice and movement to accompany these illustrations. This evolves into what seems like an embryological group dance. The performers, as if a cluster of cells, move over an exhibition structure displaying the mummifed remains of an anonymous woman (later named Maren, after a song) who died from cholera and was found largely intact due to the oxygen-poor mud that surrounded her body. Here, the performance meets the exhibition in both a symbolic and concrete way: Embryo meets mummy. Life meets death.

There is more to life than just being alive’, I hear an abortion provider say on the radio. Her voice sounds tired, there is a sense of defeat. The statement doesn’t ask for an answer, but I spontaneously think about my own pregnancy and try to imagine some deep unconscious memory of having once been an embryo myself. I am not sure if I can tap into the latter, but I do know how it feels to have an invisible embryo inside of my body (to whom I am as invisible).

And from what I remember, this prospect of life was always accompanied with the possibility of death. Pregnancy is a strange place to be in. Therefore, it is hard to digest that certain people, including people who haven’t even had the experience of being pregnant, talk about the embryo as separate or independent from the hosting body, as if it were an individual, a person, while it is that body, it belongs to that body – YOUR BODY, the only body that can decide and has the right to decide. It’s not that I want to discredit ‘the wonder’ of the possibility of bearing potential life – it’s miraculous, surreal and science-fiction, all at once. But it’s sad to hear someone use a definition of life so one-sided it inspires them to control other people into reproduction—embryos as innocent souls in need of salvation from being killed by the ‘unwilling mothers’.

I don’t think I have it in me to convince or change the mind of a person who opposes abortion on ethical grounds. Actual conversation with people who hold very different views have become quasi impossible anyways. In any case, and maybe in response to this unlikeliness, I started fantasizing about a collection of fluid spaces as a possible space for an impossible conversation and drifted into strange visions. I began to imagine a group consisting of people from all over the abortion-opinion-spectrum—abortion providers, feminist activists, judges, politicians, priests— each one trying to connect to the embryological state. There is no screaming, only soft sounds of movement that have not been felt in what seems like a million years. A voice is guiding them through, talking about ‘tissues, membranes, the time before we had arms and legs, when we were just a three-layered disc with a front, middle, and back’. Later, one by one, the people are leaving the space, finding their way out and into the forest. Once there, they lay down on the grass and moss, practicing their collective death together, while consolidating the understanding that human life can mean many things. Then: surrounded by strangers – not strangers after all – and feeling close to earth, close to death.

Body-Mind Centering® (BMCTM) is ‘an integrated approach to transformative experience through movement re-education and hands-on repatterning. Developed by Bonnie Bainbridge Cohen, it is an experiential study based on the embodiment and application of anatomical, physiological, psychophysical, and developmental principles, and utilizes movement, touch, voice, and consciousness. This study leads to an understanding of how the mind is expressed through the body and the body through the mind.’ (bonniebainbridgecohen.com)

Olive BieringaJuly 19, 2022
Our published writingsPress for a collection of fluid spaces

Embryology 2.0 through the lens of Body-Mind Centering®