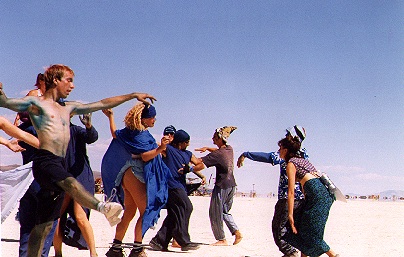 A seven day movement performance ritual that wove its way up the chakras of the body. 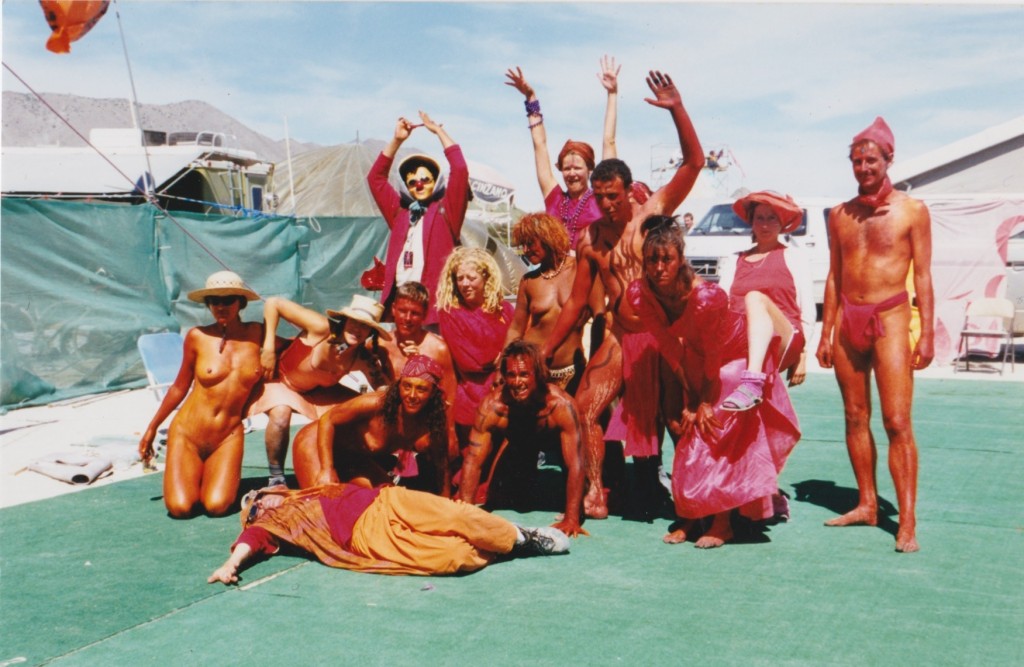 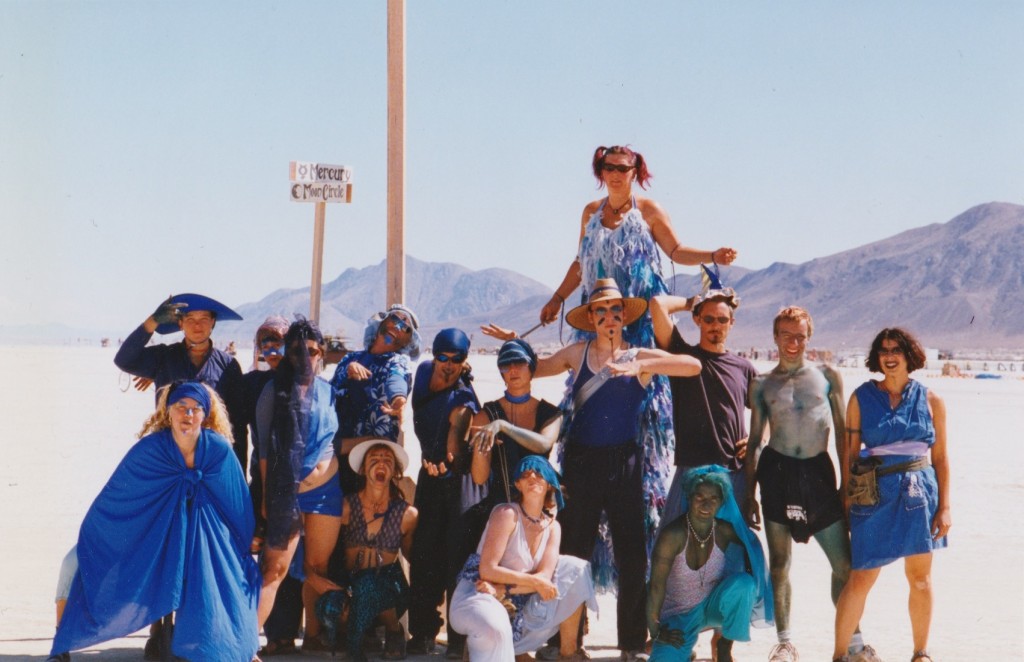 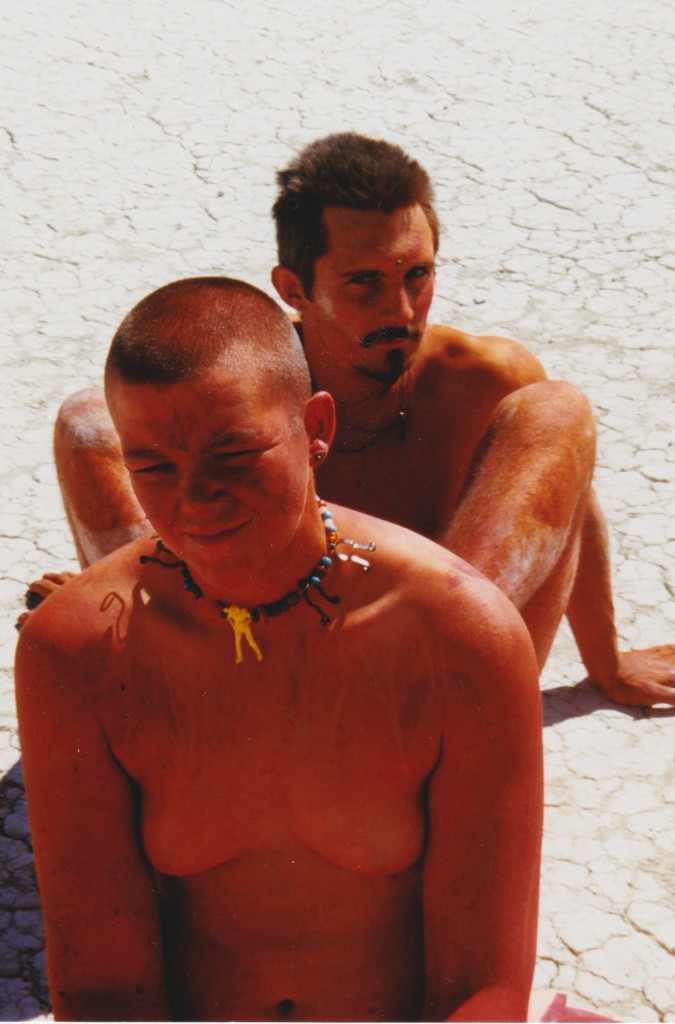 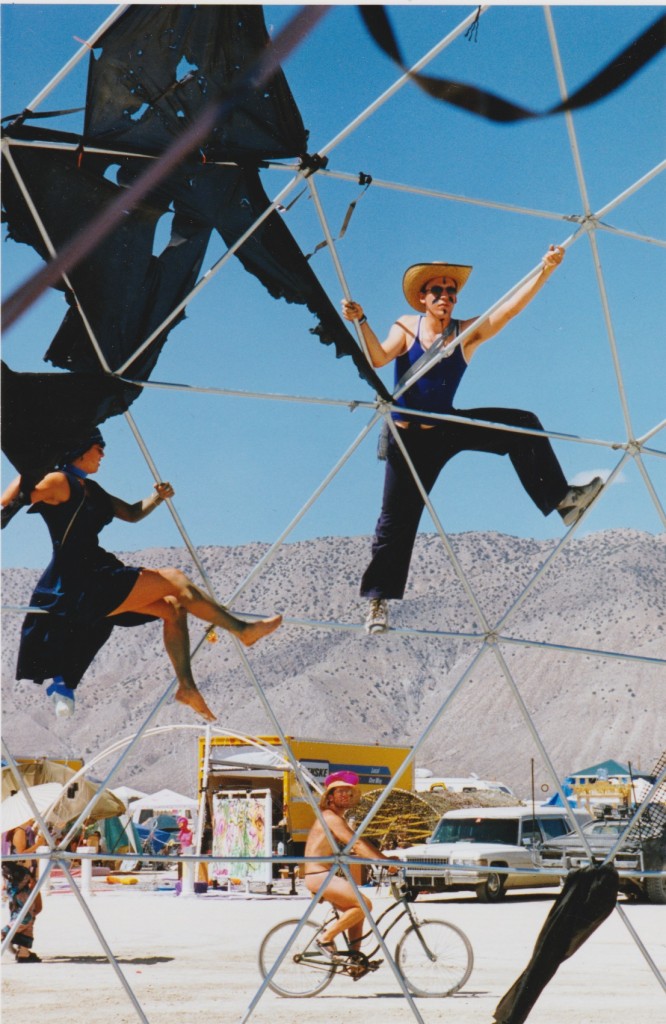 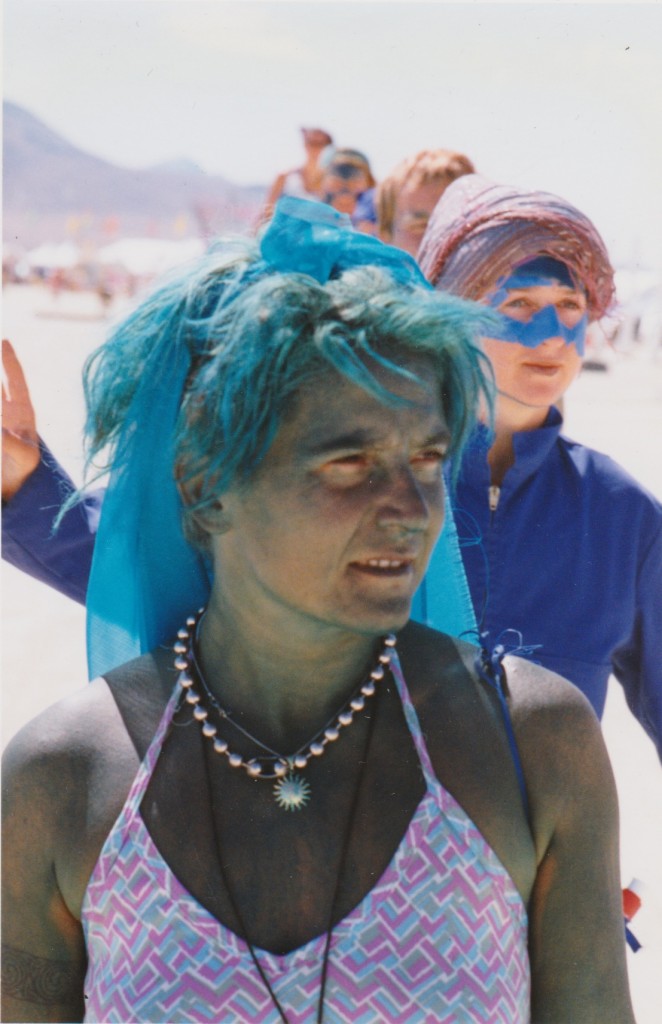 I wake in a pile of sleeping people in sleeping bags and stumble into crisp morning air to do yoga on our astroturf front lawn in my orange jumpsuit. Horns, capes, beads, bindis, dreadlocks, cowboy hats and suits of armor march by unnoticed.

New friends eat, dress and talk about this morning’s dance. We slowly decide together and the neuroscientist bodypainters costume us in red. Waiting for my turn I talk of pheromones with a flame-colored woman, elegant like cocktail parties.

We roll, spiral and bless our way out into this nudist pyromaniac inventors convention 20,000 strong. We pass an anatomy lesson and a bartering session on our way through the crowds of geodesic domes, RVs and billowing, rainbow-colored parachute tents. Our cracked earth ballet draws attention from a photographer on a motorized couch and several ten foot bicycles cruising the alkaline lakebed.

As our dance ends, I gravitate towards the ice cream truck.

I find myself holding an eleven month old on a trampoline and cheering a massive parade of topless women on bicycles. I hope to enter the camera obscura before the sun sets. Following impulses and waiting in lines I understand the futility of planning here and how much experience in so short a stay this environment allows for. And the utmost importance of generosity on all levels. By the time dark arrives I have ridden on a rotating twenty foot seesaw with a man and a boa constrictor, watched mock battles in Mad Max’s Thunderdome and explored just a few of the dozens of twenty four hour a day raves. I’ve seen shooting stars, camels and a tree of bones. Ninety degrees has dropped to forty degrees and buildings are burning on every side of me. It feels like a medieval costume ball. I witness a blissful exchange of bodily fluids across a field of giant, fighting, flamethrowing robots under the towering, not yet burning, man.

A man with blinking red nipples and I play a game but the cards are whipped off the table and I can just barely see or hear him laughing about it through the sudden duststorm. i try to pick up the cards but I get distracted by a silver-blue woman riding a seven foot vibrator and speaking in tongues. She dismounts and we discover similarities in our favorite artcars. Hers is a van with a VW insect (with antennae, eyes and wings) lounging atop and vending machines within. Mine is a golfcart with a neon flamethrowing spider atop and blasting techno. I stop to rest at a random fireside and people are passing around water, cookies and recreational drugs. No longer surprised, I recall the instructions I got for the festival:

Bring toys, trinkets and treats to barter and share

Drink so much water that you piss clear

Leave nothing behind when you go

Participants only, no spectators

By now I draw my own conclusions:

Judgement of others becomes obsolete

Judgement of self becomes obvious 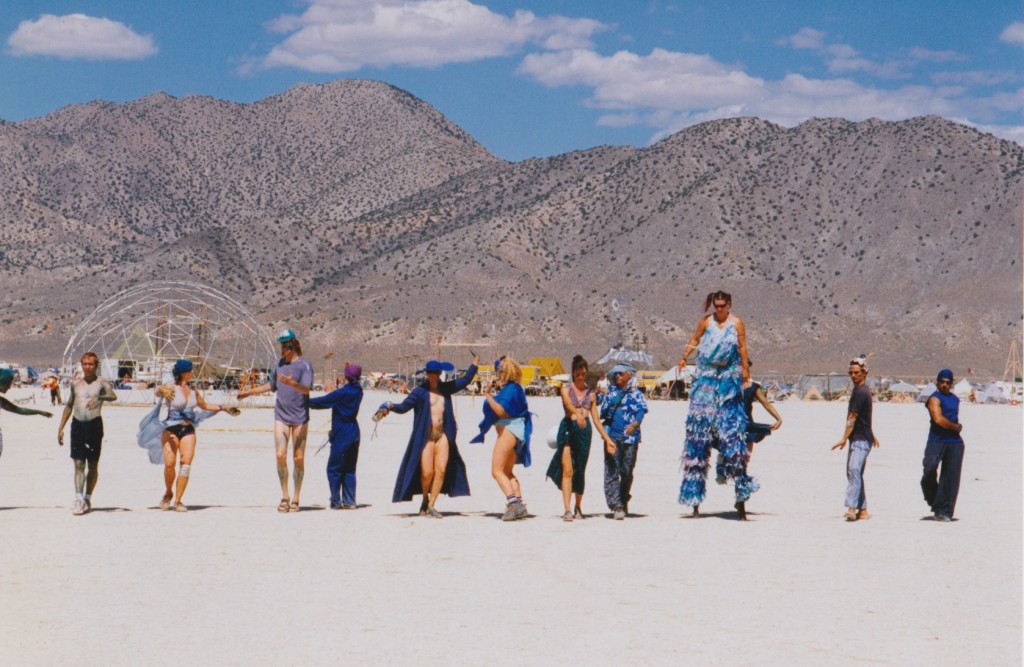