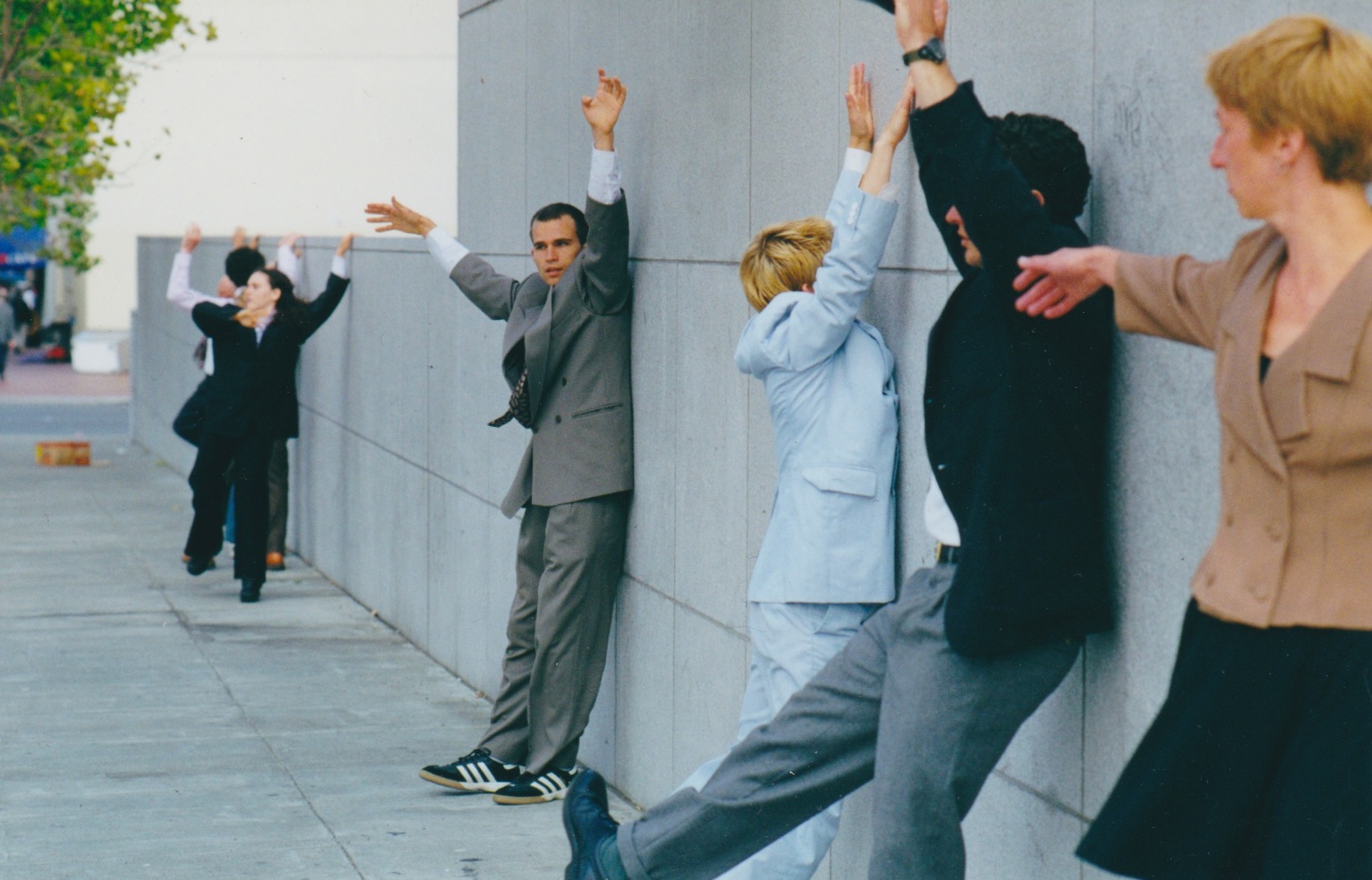 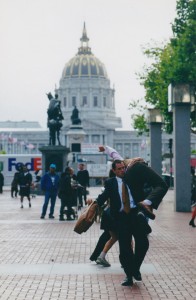 We started doing a sound and slow motion walk in the beautiful and resonant San Francisco City Hall.

Spilling out into the Civic Center Plaza and into United Nations Plaza, which in contrast to the grandness of City Hall is two rows of benches full of homeless people. We then proceeded down Market St. till Powell street. Highlights include trust falls backward off of a high fountain into the arms of the Cartographers, dancing in BART entryway and carrying a worker from a store up above our heads for two blocks while his friends followed and laughed. 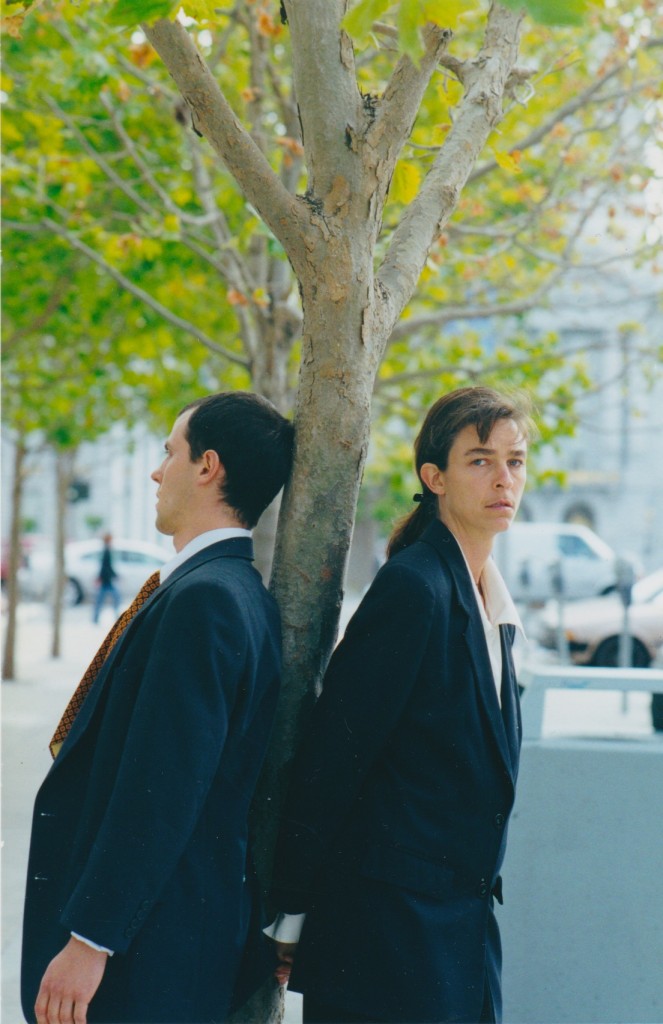 I just spent the last two hours of my life dressed in a business suit, dancing and singing and doing theater with other similarly dressed folks in public. Today we started in City Hall, where we did two slow motion walks down the majestic interior staircase to the sound of three of singing haunting harmonies from a balcony high above. We then moved to Civic Center Plaza, and eventually down Market Street, often in single file, often doing the same motion, sometimes breaking into wild dancing or lifting or running or silly theater. As usual, people heckled, applauded, congratulated us. Some observed that we have too much time on our hands, adding that we all need to get a job.

This is true. I do need a job. The onlooker that finds my creative public expression elitist or irrelevant is making a very good point. I look in the the help wanted ads every week hoping to find the perfect position for me: wanted: self taught singer with chutzpah. Must be able to conduct up to twenty people in material that you make up on the spot and make unearthly loud noises without shame. Extra consideration given to people who can simulate opera music without ever actually learning a whole piece. Staring pay $40,000 yearly with benefits. Wanted: Improvisational Dancer with strong listening skills, dynamic and inventive physicality, and a good sense of composition. The ability to run from security guards or reason with cops a bonus. $50,000 yearly with a months paid vacation.

I fear this is not what the person of the moment means when s/he says that i need to get a job. We satirize corporate culture just by adopting its uniform and looking reasonably passable. We are mostly variation as on white and most of us can look squeaky clean enough. We walk in a single file line and we draw attention. WE walk arms extended like zombies and we get a few laughs. We take turns doing wild dancing solos in the BART station to the sound of other rest of us clapping and we get the range of reactions, from embarrassment to guarded interest to hostility to that look-askance-look which says, these people are crazy. WE lift each other or do more acrobatic feats and we may become more valid in some people’s eyes because we have verified that we do something which people can name something with some entertainment (and therefore market) value. At last we have more clearly separated ourselves from the lunatics.

We separate ourselves from the lunatics walking the streets of the financial district with slightly colorful nooses around their necks and clothes in slightly varying shades of gray talking into a tiny black plastic box and staring off into space. We separate ourselves from the lunatics with dirt caked onto their necks walking around the Civic Center talking into their shopping carts and staring off into space. WE are more market-identifiable (identifiable by the standards of market culture) than the latter and less so than the former. Howard Zinn speculates that the attitudes of European male power structure toward white women, African people, and Native Americans had the same oppressive and dehumanizing flavor; it’s just that white women had the highest use value, being emotionally tied to the men as well as important workers, so the means of oppression was the most subtle and coated with niceties. The Africans were considered valuable property, but were not considered an emotional investment, so the colonists had to strike a balance between keeping their property firmly in check and keeping their property alive. The Native Americans were simply in the way. For this reason, the government had no problem lying them, cheating them, and killing them as much as possible.

Same still holds true. The less marketability you have, the more expendable you are. Although our performance troupe does things in public which have no identifiable place within market culture, thus placing us suspect and possibly dangerous, our action are offset by our mostly white skin and

our ability to look mostly mainstream. As one African American witness to our antics commented: “Man, I just scratch my nuts and they take me to jail. 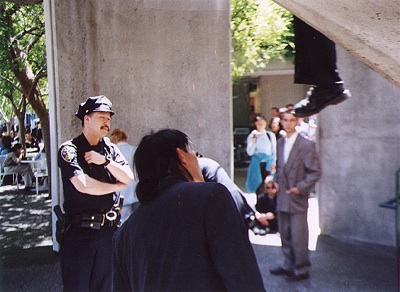 What do you clowns think you’re doing?” 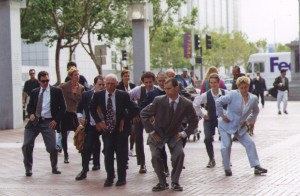 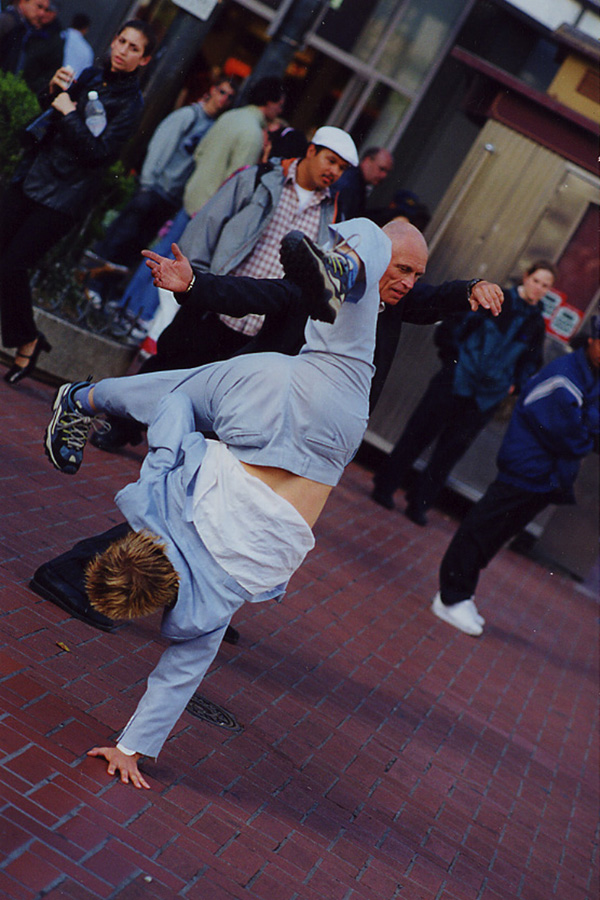