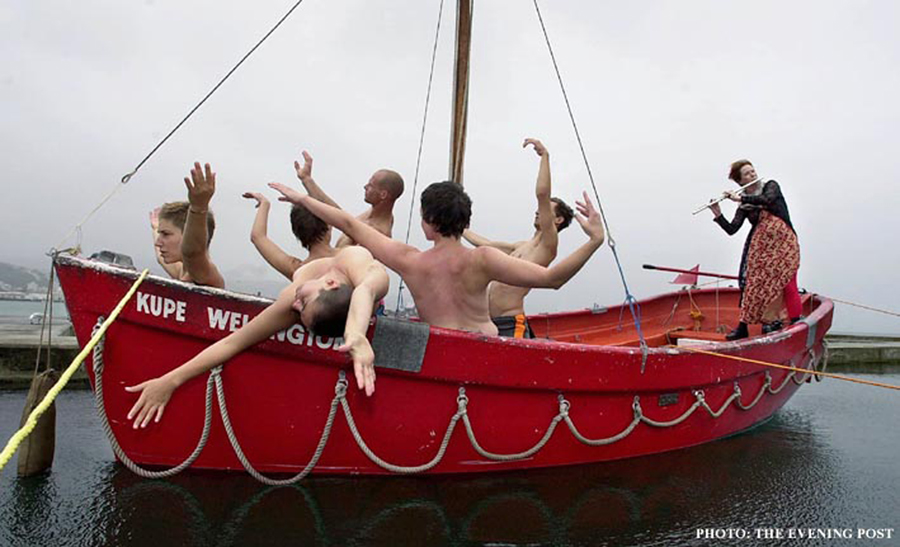 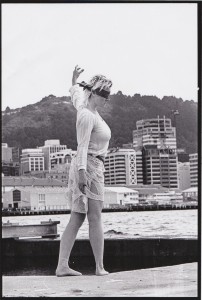 This performance took place on a marina breakwater in the middle of the harbour. The work was built over a series of six days. It was essentially a series of images, movement and character studies developed from the site and props we associated with this location. Ropes, boats, wetsuits, buoys, flippers, buckets. We collaborated with composer and musician Michelle Scullion and musician Shona Holborrow.

Dressed in wetsuits the performers gathered on the outside edge of the breakwater in a standing mediation. The audience entered the floating dock where they could walk or sit. This was a mooring dock for the boats in the marina. The dock was the same length as the breakwater (100 feet) and was three or so meters away from it.

After ten minutes of arrival and contemplation Matt entered with big yellow flippers on and three buoys. Threw them in the water in front of the audience, dived in and disappeared. Popping up minutes later on the outer side of the breakwater, way out in the harbour. The performers began to “conduct the elements” or in a sense be conducted by changes in the environment, the waves washing over the breakwater, the clinking of hallards, the passing of ducks. Our musicians exited the breakwater to return to their instuments on the dock. Improvising over their own prerecorded music with more layers of violin and flute. Edge duets came next. Three duets working with the corner between the concrete and the water, balances, leaning, sliding into and out of the salty water. 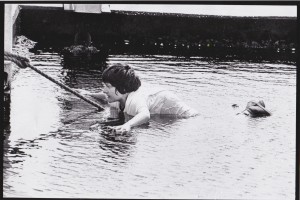 Michelle’s clanging and rythmic percussion followed sending the dancers off down the length of breakwater in a counterpointed unison phrase that worked parallel and perpendicular to the audience. As the dancers arrived at the end of the breakwater the phrase deconstructed itself into moments of stillness. Silhouettes under the setting sun.

An afternoon teaparty in a sinking dinghy, “oh lovely dear”. “I like that”

The prop section:
1. the tin milking bucket, half filled with water, strapped to his wrist spinning in circles, and hurling his body with the velocity of the bucket to counterpoint his weight, into the water. Over and over again.
2. the yellow flippers in plie, in arabesque, in pas de deux
3. the white wedding dress, ophelia floating down the river, heavy and bedraggled as she reaches the land
4. the boogie board jock, with his sporting yellow cap, launching himself high into the air to come smashing down into the water
5. the black skirted diva, topless, bound to a pole with many metres of black rope
6. the naked body wrapped in clear plastic and then free, the plastic caught in the wind spraying water droplets across us like surf spray

A conch blows…the Kupe, formerly the bright red liferaft from the Kupe tug boat, appears around the corner. Mystical flute tunes drift out across the water. Bodies draped in the bough, starboard, port and aft as the boat floats down the passage way between the dock and the breakwater reaching the audience. The performers dive out swimming in a line back up the deep turquiose of the channel dressed only in red underwear to return to the opening image. Performers lined up in a standing meditation facing the harbour, the city, the hills, Wellington. 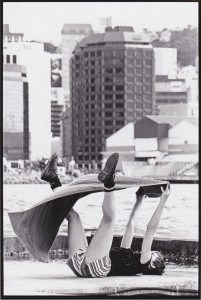 A floating concrete breakwater, surrounded by the exquisite Wellington Harbour. The breakwater is there to protect the marina from waves. The breakwater is like a big ladder someone has tipped into the water and it floats flat. There a over twenty spaces between it’s rungs which are in effect pools of salty ocean.

We decided to bring our own costumes and sun block and floating devices and as many musician as we could muster. We played for maybe an hour.

We warmed up together away from the location and then processed in a line to the dock, crossed in a boat and entered the space. Walking down the breakwater in a line to our individual pools. The structure is huge and with many performers it was still easy to have our own space and work in solo mode. After approximately half an hour we began to come together and interact, crossing into each others space, duets, trios, quartets until a larger group massed around one pool. the audience freely walked up and down the floating dock a few metres away. The wind, waves, cold salty ocean, clinking of the yacht masts and slipperyness of the algae made for much adventure. We rigged ropes to swing across the pools with. We bought flippers and wetsuits and plastic flowers, body paint and containers for measuring, boats and taiko drums, umbrellas and beach towels, tutus and nurses uniforms, yellow raincoats and river rocks. 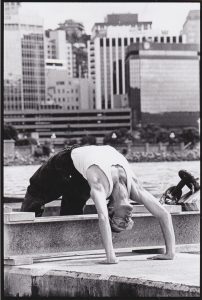 Our very first visit to this incredible site. The middle of the harbour as our backdrop, eclectic architecture. Twenty square pools of cold salty water, floating rubbish, cutouts with no bottom. A floating breakwater.

Arriving processionally by boat and moving down to our individual pools. The audience on the floating marina a few metres away, free to walk up and down and witness the visual feast from any perspective. Performers invested in physical tasks or costumes and props that led to movement, characters or music. “Allowing ritual to construct itself”. Eventually consolidating and exiting as we had entered in the same processional manner. Concrete floating on moving sea wind wave swept, fish visible, slippery weed and slime to navigate, water to fall into and be rescued from, taiko drummers, rocks, tulle and yellow raincoats.