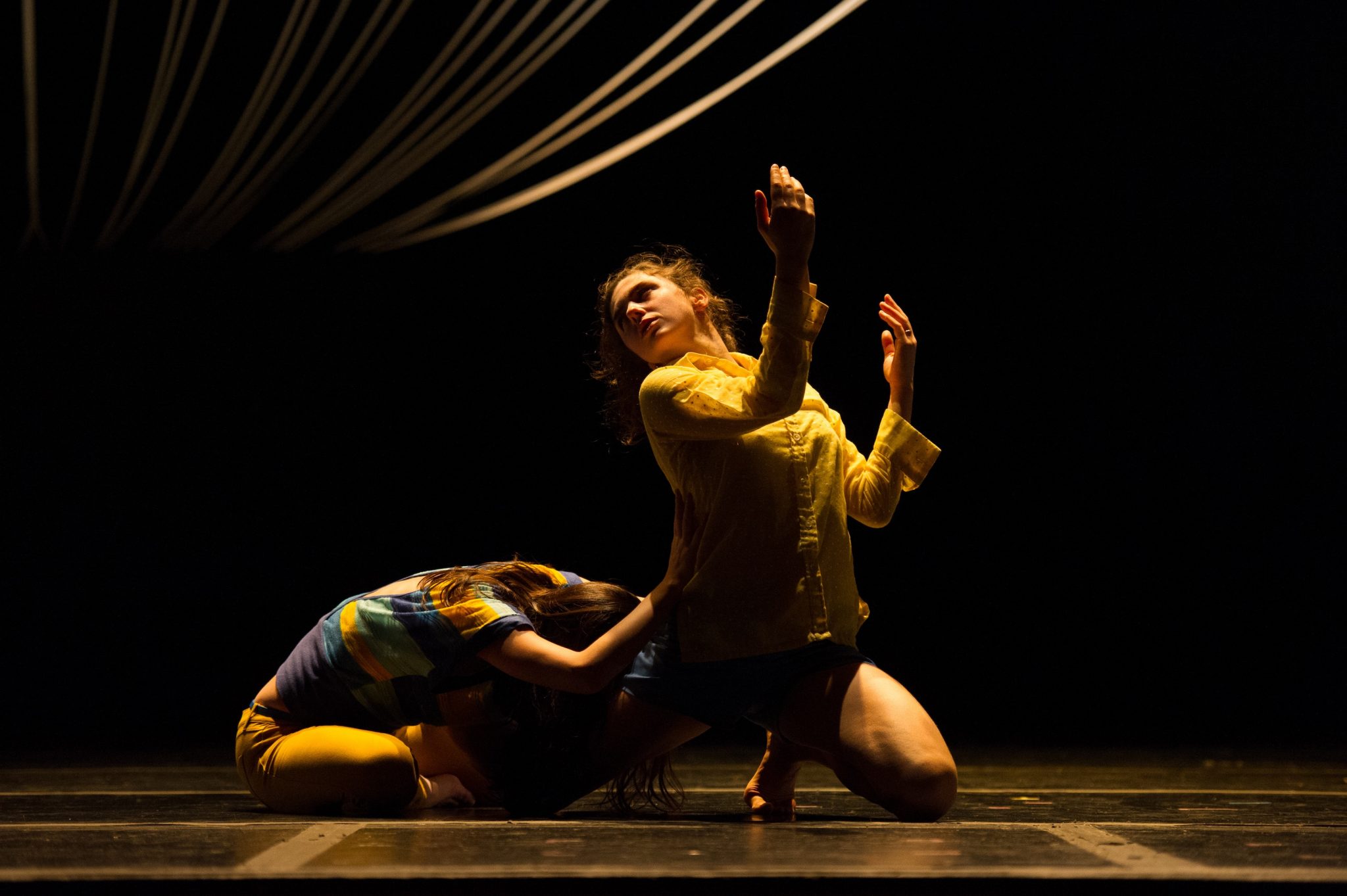 To spark discussion, the Walker invites local artists and critics to write overnight reviews of our performances. The ongoing Re:View series shares a diverse array of independent voices and opinions; it doesn’t reflect the views or opinions of the Walker or its curators. Today, Penelope Freeh shares her perspective on Thursday night’s performance of Super Nature by theBodyCartography Project with Zeena Parkins.

We fell into the work as a performer stumbled down the stairs and onto the stage. Already there were performers as pedestrians, awkward and uncomfortable yet colorful, like birds of paradise shifting for attention. They made room for the newcomer, accommodating her, sort of. Gangly and contorted, she couldn’t help but do her dance. It was how she was, innately.

Another performer began from a seat among us. She made herself known by intensifying her breathing, chorused by the group. A visceral long-distance back-and-forth ensued till AnnaMarie Shogren revealed her true colors.

She entered the light, the most vibrant of them all. Her dance was a comical star turn, her face the epitome of a silent movie actress. The group organized into an ensemble of six. (Extras made their way off stage.) Group, re-group, and emerge Emily Johnson. One of our most compelling local performers, her brand of dance here was seductive, secretive, shielded by the bodies of the others.

And so Super Nature begins.These episodes are framed in the space by a string-hanging. Like a giant ponytail, it canopies the stage, tied at the back and on an angle. Light plays upon its flimsy surfaces reminding me of rain or clouds patterning. We are in a contrived and organic environment and the soundscape soon supports that with strains of harp mixed with electronica: acoustic and electric, a perfect and pithy balance for this work.

Performers couple up with strange agendas. There’s an invasive yet funny duet involving a body mic. Things degenerate, break down, devolve. Clothes are removed to varying degrees but just before that is my favorite moment, a double duet of same-sex couples, the timing of which is offset just perfectly. The images are intimate, touching, obtuse, sculptural, and somehow iconic.

One by one the undressed performers enter what becomes a new landscape, now filled with smoke. They carry branches, at once covering themselves and simply becoming them. Otto Ramstad (one half of BodyCartography Project along with Olive Bieringa) gets physically guttural. Recalling his vocals from earlier, this time it is all embodied sound. He dips his head to initiate tumbling and head-sliding into laying down. On all fours, he gallops, exactly like a chimp, wild and driven by instinct. His rounded back reveals his ribs; his contortions sensuous and necessary, not emotive.

He claims Emily, who remains fully clothed. It is a sad and startling image, a collision of two worlds, made odder still in that, at one point, she initiates a scrabble. Maybe we’re all just operating from instinct after all, our clothes merely a ruse.

Near the end a long sequence ensues, tableaux-like, in which time alters. I imagine it’s like watching a live nature cam. Events happen at their own pace: bodies shift, dash, huddle,protect, isolate, cover. Two large furs move low across the space. A body emerges from one and there’s a Lord of the Flies moment (cleverly implied with a projector), but gentler, more organic, like it’s supposed to happen. Satisfyingly, the hanging gets released and flings toward us. The performers inevitably entangle, at once constricted and freed.