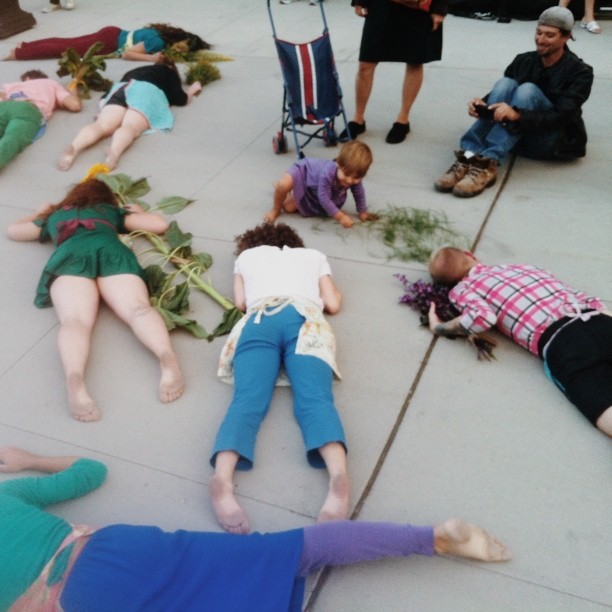 There is no journey that grips the imagination of the American people more profoundly that the trip from east to west. For three weeks in September, traveling in the same direction the tracks were laid, is a train carrying a band of artists, musicians, filmmakers, writers and social media mavens. For one week VMAN went be along for the ride.

Ten performers, each holding a different vegetable or stalk, lay down next to the light rail track running in front of St. Paul Union Depot. We had arrived at the fourth stop of Station To Station, an art happening curated by Doug Aitken that was making its way across America on Amtrak rails.

The Twin City event opened with a piece by a local pair of choreographers, Olive Bieringa and Otto Ramstad, known as BodyCartography. The props being carried by the dancers—among them a sunflower, a bunch of lavender, some Swiss chard and a gourd—came from an edible garden installed at the Walker Art Center in neighboring Minneapolis by artist-in-residence Fritz Haeg.

A young girl clambered down from her candy-striped stroller to join the performers twirling on the grass. “She’s their choreographer,” whispered an onlooker, pointing. The group giggled.

What looked like a happy accident was actually rehearsed, the two-year-old girl being Bieringa’s daughter. Captivated and amused, the crowd followed her past yurts by Kenneth Anger, Urs Fischer, Liz Glynn and Ernesto Neton, and into the station. Closed since 1971, the depot reopened in December after $243 million in renovations. More than a historical landmark for locals it’s also a monument; during its heyday thousands of soldiers left its platforms headed for war.

The station, restored to its former glory, has also been modernized. There is an electric-car charging station, and a bike shop is set to open inside the depot this coming year. According to The New York Times, we’re witnessing “The End of Car Culture.” The number of miles driven per capita in the U.S. has been on a steady decline since it’s peak in 2005. Polls seem to show it’s not just a result of the recession and high gas prices but a generational shift in values. Many millennials are not only forgoing car ownership, they’re not even getting their license. The renovated St. Paul Union Depot is emblematic of these changes.

The stage set up for the night’s event was dwarfed under the vaulted ceiling, but Los Angeles-based noise band No Age had no problem filling the space. Sound reverberated through the atrium. The distance between the crowd and the music was so pared down you could actually feel it. The beer bottle in my hand trembled under the feedback.

Ariel Pink performed a short solo set—standing taller onstage than he did in person—and then Eleanor Friedberger took the stage, her band patched together from musicians on the train. “They learned four songs an hour before we played,” Friedberger later told me.

Between sets I approached a woman standing alone in the crowd. Hung on the walls of the Great Hall were prints by Sam Durant, Ryan Trecartin, Ed Ruscha and Yto Barrada, among others, but she waited in the center for the next happening to, well, happen.

“I want more to consume,” she said. With the recent explosion of music and arts festivals like Coachella and Electric Zoo, it’s understandable that when people go to a show, they expect a spectacle. “Maybe that’s a critique of me as a consumer,” she added, looking around. She was trying to figure out who were attendees and who was part of the crew. A cursory glance around the room revealed more lanyards and red tabs than you could count. She was suspicious. This wouldn’t be the first time someone called it a commercial.

Len Peltier, Levi’s creative director, has heard it all before. When the brand launched its workshops the response was similar.

“People were skeptical—why were you doing it for free?” said Peltier. With ticket sales from each location of Station to Station going to partner institutions and museums it’s been a huge undertaking for Levi’s to finance, even with artists and musicians donating their time and work.

“It’s a difficult thing to explain the return on that investment,” continued Peltier, “other than we know we started a great conversation with our consumers.”

When Patti Smith finally took the stage as the last act of the night the atmosphere in the venue changed. Suddenly, no one was waiting for the next thing to happen, everyone was in the moment. Smith’s son Jackson Smith, a Detroit native, played guitar for her set.

The crowd roared. Surely transit would be in the budget.

All travel and expenses paid by Levi’s.