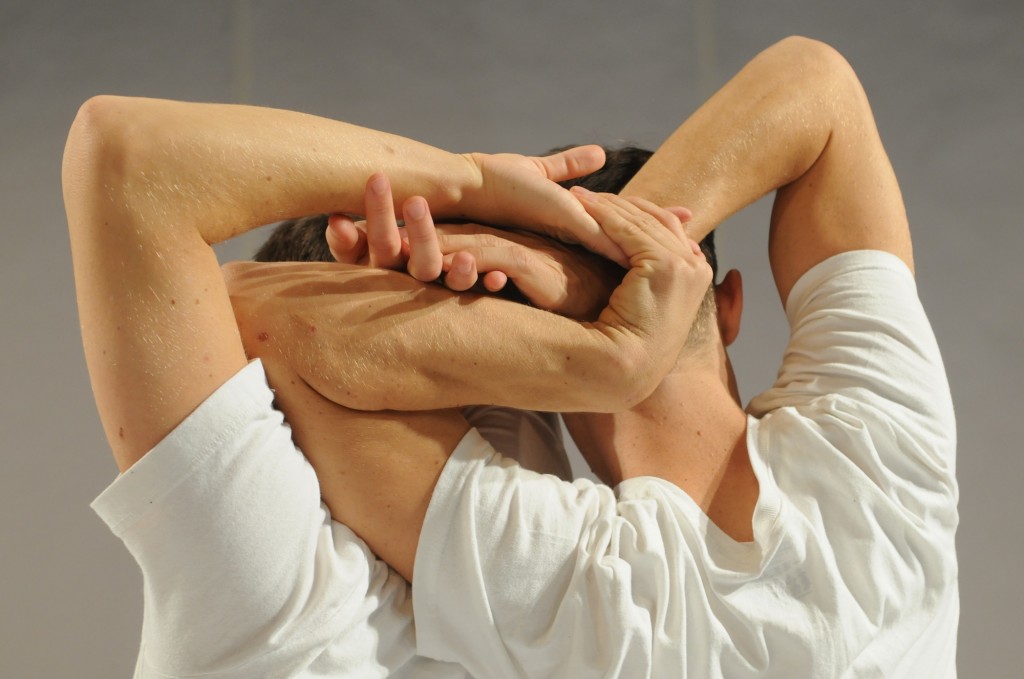 “He’s going to seek my approval.”

“He thought about how space is anything but neutral.”

In Symptom, “twins” — dancer Otto Ramstad and visual artist Emmett Ramstad — create a performance that bridges the gaps between seeing, knowing, and empathy and investigates the symptoms of postmodern reproductive biology. Symptom queers concepts of naturalness by asking viewers to question their understanding of the human body and kinship. With a white paper set, microphones, scores by Dan Graham and Bruce Nauman and sound by electro acoustic composer Andrea Parkins, Symptom is a bold visual work of sculpture, drawing, movement and text.

The audience is given a large extended program with various slightly contradictory writings about the “twins”, creation mythology, scientific and philosophical, that further bring into question the “truth” of what your seeing compared with what the performers say and what you read. 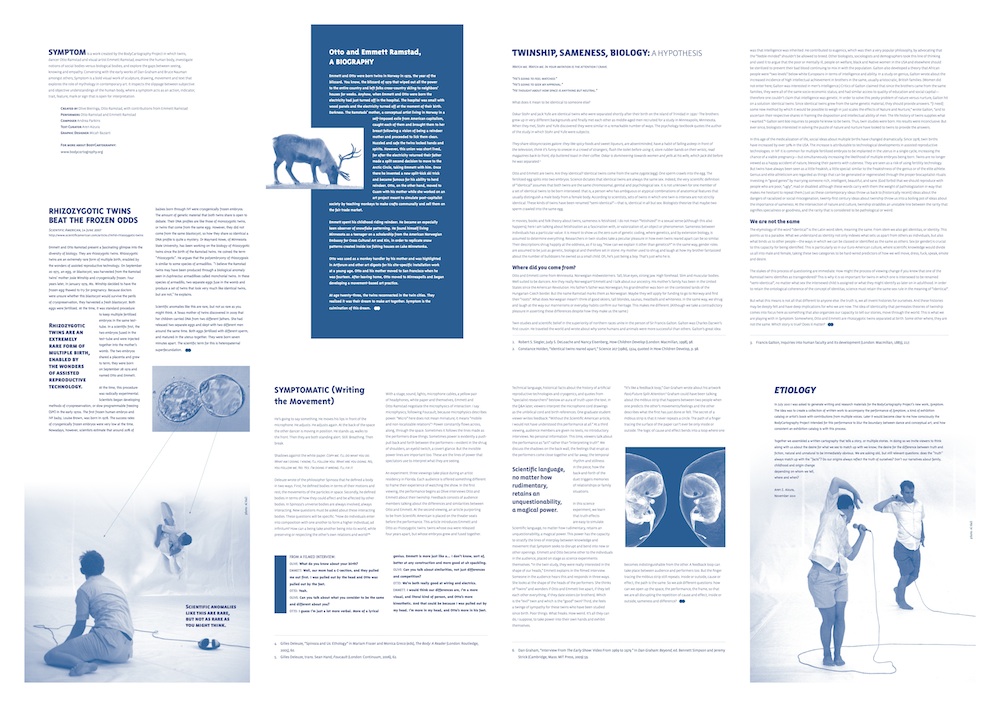 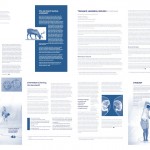 “The amount of space the viewer has in the work coupled with the overload of information is kind of brain exploding… I think this is where the brilliance of Sympton really shows up. The narrative elements are suggestions (symptoms-signifiers) the poetry/reading of narrative/character/relationship is in the reading of the action, not in the action. Which then is this brilliant complication of the visual field they reference, subversion of the theater, and re-imaging of identity.” – Laura Arrington

“it’s a stirring piece, viscerally, and you’ll be thinking about it afterwards…” – TC Daily Planet

“From textured set to tangled limbs, fictional biographies to queer ambient sound, Symptom privileges what is felt over what is seen or known…Attempts at agency or autonomy in Symptom produce a self-identity that is always touched by others. Playing on the intertwinings in both movement and genetics, the dancers ask us to see iden- tity as a tactile negotiation between sameness and difference. Here dance re-appropriates the dominant discourse of biology and disarms it by taking it outside the verbal and into the realm of touch and move- ment. If knowing is performed not by naming or mastery but by dissolving into dance, then the movements of a felt identicality help to recode the “other” as always already a part of the self. The pre-circulated program for Symptom offers an elaborate and authoritative fiction for the dancers’ “freakish” bond, presenting it as a generic mash-up of bio-narrative and origin myth. But the performance itself undoes the authority of all master narratives through touch, constantly reframing the meaning of their relationality. Thus, the periperformative “he reinvented himself” is also a larger motif that argues for forms of haptic knowing through the repetition of queer touch.” Women in Performance Journal

The project has been supported by a residency at K3, Hamburg, the Jerome Foundation, Maggie Allesee National Center for Choreography, Headlands Center for the Arts, MAP Fund/Rockfeller Foundation and the McKnight Foundation.

Emmett Ramstad is a visual artist who has exhibited prints, sculptures, mixed media drawings, and video throughout the United States and in Turkey. He received his MFA from Minneapolis College of Art and Design and his artworks are held in several collections, including the Weismann Art Museum. Ramstad has collaborated as a set and costume designer with The BodyCartography Project on “Mammal,” “Half Life,” and “Super Nature.” Ramstad has also curated art shows “Hotdog” at The Spare Room Project and “5 Objects and a Story” at Million Fishes Gallery in San Francisco, as well as the national postcard show “Trans|Post” in Philadelphia, where he currently lives and teaches printmaking to queer youth. He misses living in the Bay Area.

Andrea Parkins is a composer, sound artist, and electro-acoustic instrumentalist who engages with interactive electronics as both material and process, exploring strategies related to Fluxus’ ordered and ephemeral activities. Especially known for her uniquely gestural/textural approach to her electric accordion and customized sound processing,  and for her audio works featuring amplified quotidian objects, she creates sonic fields of lush harmonics and electronic feedback punctuated by intentional/accidental moments of gap and rift. Parkins’ work has been presented at the Whitney Museum of American Art, The Kitchen, the 1st International Sound Art festival in Mexico City, NEXT in Bratislava, and Cyberfest in St. Petersburg, Russia. She also records and performs worldwide as a solo artist, and in collaboration across genre/discipline with artists such as Vera Mantero, Otomo Yoshihide, and Nels Cline, among many others. Her recordings have been published by hatology, Atavistic and Creative Sources, and Important Records. Parkins’ work has been supported by American Composers Forum, the French American Cultural Exchange, NYSCA, Meet the Composer, Harvestworks, and the Frei und Hanseastadt Hamburg Kulturbehoerde in Germany.

Aren Aizura is a scholar and writer who is interested in the ways that bodies, politics and technology transform each other: how bodies are regulated, how bodily desires and pleasures escape or reproduce regulation, and how science dictates how bodies should experience the world. Currently he is a Mellon Postdoctoral Fellow in Women’s and Gender Studies at Rutgers University.

Michael Wangen is a longtime lighting designer in the Minneapolis area, best known for his work in theater where he has served as resident designer for several companies including Penumbra Theatre. New York credits include Feathers at the Flame and Brown Butterfly performed by Movin Spirits Dance Co. at Aaron Davis Hall as well as last year’s theatre production of Pure Confidence at 59 E 59. He is also a frequent collaborator with noted performance artist Laurie Carlos.

Special thanks to Mike Hallenbeck and Micha Bazant. 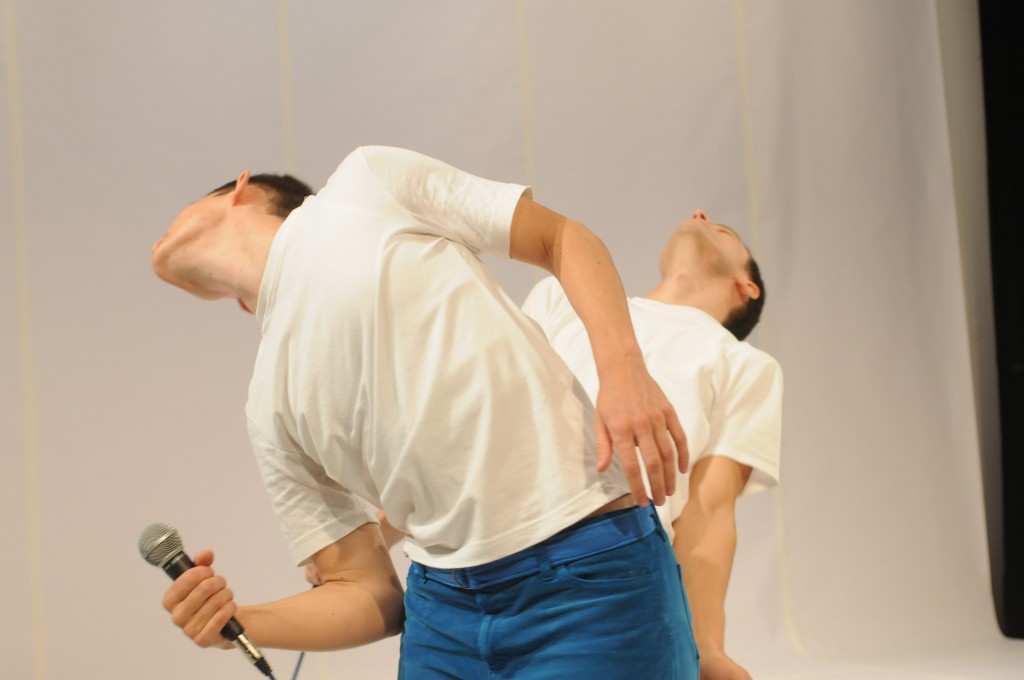 2010
Premiered at Intermedia Arts in Minneapolis as part of their Catalyst Series.

A study of Symptom was shown at Movement Research’s Judson Church and as part of the SCUBA touring roster presented by the Southern Theater in Minneapolis and by Philadelphia Dance Projects at the Conway Theater at Temple University. 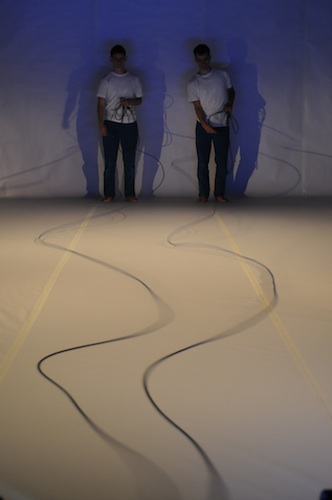