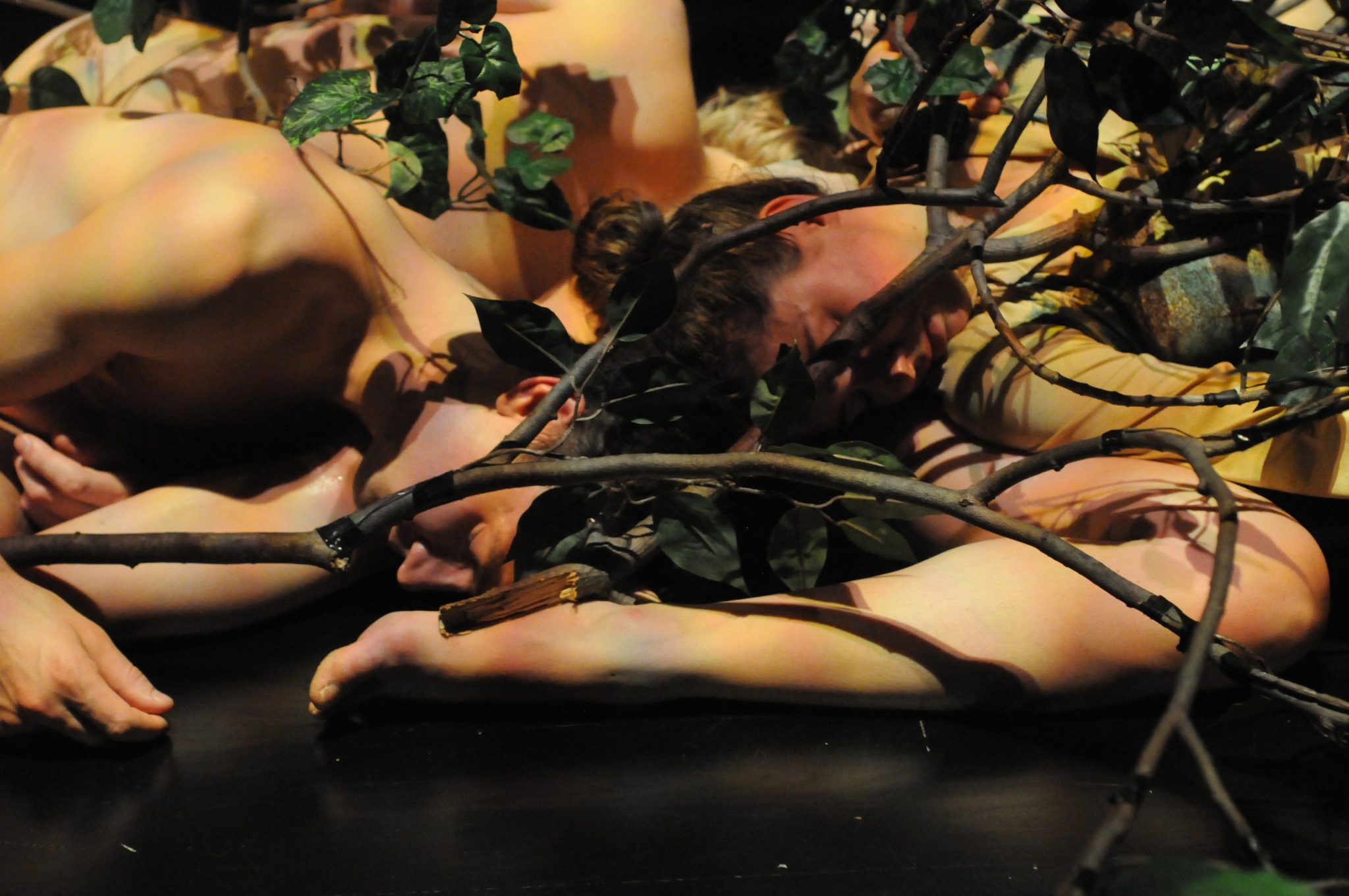 “We had another show we did in New York at the COIL Festival in 2009, called Holiday House,” Otto Ramstad, half of the core creative due behind Minneapolis dance company Bodycartography Project, was explaining to me. “The set was a living room and a dining room and there was a tree in it. And our lighting designer had a daughter who was maybe three years old, and they came to see the show in Minneapolis before we toured it to New York. And she came up to us after the showing—she just walked up onstage in front of all of us—and she said, ‘Some of the things that are supposed to be outside, are inside. And some of the things that are supposed on the inside are on the outside.’ So Olive asked her, ‘Was that confusing, or was that exciting?’ She said, ‘It was confusing and exciting.’”

“So that’s been sort of our mission statement or underground philosophy for all the work we’ve made since then,” Ramstad’s collaborator Olive Bieringa continued.

That description pretty well sums up Super Nature, the new-ish piece, originally developed for the Walker Arts Center in 2012, that the company is bringing to New York this January as a co-presentation of PS 122’s COIL Festival and American Realness (at Abrons Arts Center, Jan 14-17). Variously described as an exercise in “empathy as a choreographic vocabulary,” with references to both evolutionary biology and psychic surgery, the piece is an intense physical performance by a cast of Minneapolis artists (including Emily Johnson, herself part of COIL) inhabiting a complex, ever shifting installation-like set.

Aesthetically, the company’s idiom is informed by the co-directors Bieringa and Ramstad. Bieringa founded the company back in 1997 in San Francisco; Ramstad joined in 1999. Artistically, there’s not a clear delineation between the roles the two perform (e.g., designer vs. choreographer), with both freely moving into diverse roles in the creative process. The difference is less a matter of discipline, in fact, than approach.

The origins of Super Nature lie in a 2010 piece, Mammal, that was a commission from the Lyon Opéra-Ballet, where, as Bieringa explained, “we created a new piece without writing about it a lot beforehand, where we really just made something with the dancers over 18 rehearsals.“

The result was a piece that raised more questions than they had time to explore in France, and which provided the basis for Super Nature. Specifically, they were trying to develop a choreographic language that would provide a means for a deep communication with their audiences. In the past, Bieringa and Ramstad had freely crossed boundaries to create visual art installations—works which offered audiences intense personal encounters with the artists, and in creating Super Nature, they attempted to replicate that sort of empathetic communion in a more traditional performance space.

Part of their approach to achieving that sort of empathetic response is through an appropriation of the language of melodrama.

“We’re big fans of this little interview from Guy Maddin, the filmmaker,” Ramstad told me. “He wrote The Saddest Music in the Worldand My Winnipeg, and he works in melodrama or a silent movie aesthetic–over-acting, a lot of crazy camerawork. And he said it was so strange in film that people were so into Realism now. That no one comes up to a painter today and says, ‘That’s a really great painting, but it just doesn’t seem real.’ And he’s saying people say that about film all the time, and so when people say that about him, he talks about how the feelings that you have, in your daily life about small situations, if you were to act physically and sonically, make sound and yell, or just totally collapse when things happen, that it would look melodramatic. But we have this social conditioning that we modulate everything with. So he’s saying his films are realistic in that he’s portraying how people would actually respond to their feelings if they were enact them.”

Visually, the piece incorporates sound, video, and installation components to realize a complex reimaging of the body as an expressive vehicle. The dancers’ bodies serve as projection screens. The sound-score was developed by Zeena Parkins, and the design features contributions from Ramstad’s brother Emmett, a visual artist. Previously, the work has been paired with an actual installation (which will sadly not be in New York), allowing audiences diverse, direct means to engage with the conceptual elements of the work.

“We did maybe five work in progress showings, and the installation, so we really got test the ‘if we do this, what kind of empathetic response happens?’ So we actually oddly achieve this goal of doing something paradoxically impossible,” Ramstad explained. “And I think it’s an interesting piece because it starts in the social, and we’re really playing with interruption, and this social response people have, and at some point it drops into the forest.”

“It nose-dives, you don’t even know how it got there,” Bieringa continued.

“And then it becomes instead of this social–which a very vertical sort of relationship–it gets really horizontal and spread out and goes into the poetic and personal-emotional,” Ramstad said.

“It really asks people to shift how they’re watching it,” Bieringa concluded. “It’s an experience.”