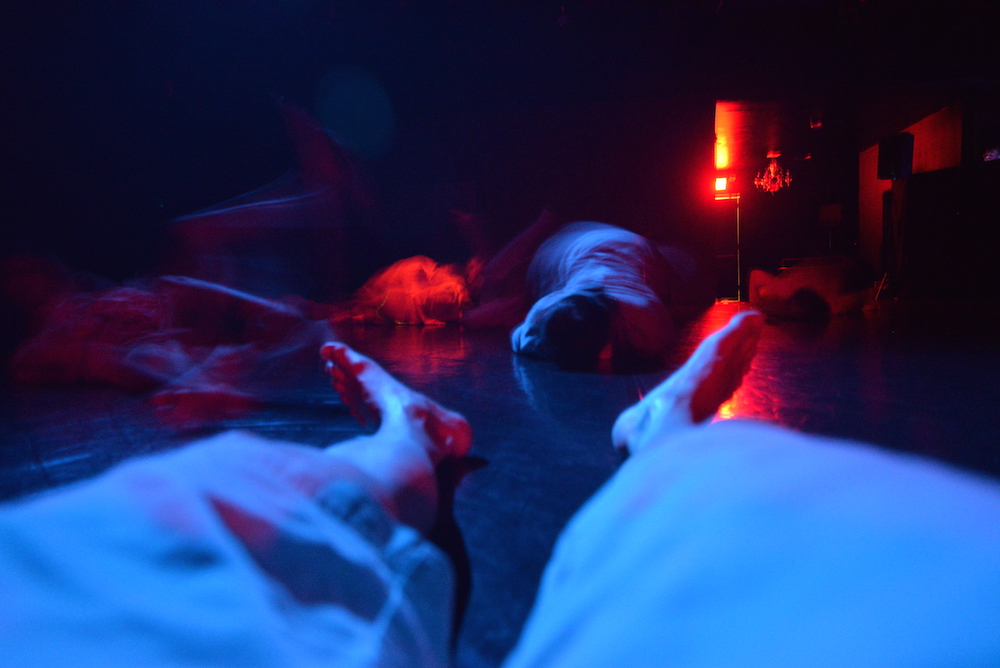 A review of closer by arts writer, dramaturg and photography Sean Smuda

BodyCartography’s closer discerns the inexhaustible and ultimately untenable form of the body as entity and relation.  Flat on my back on the floorboards of a 15×15 ft. space, eyes shut; I waited for a dancer. Footsteps gave way to leaps and scrapes and my lids flickered up to find her straddling a high sill. I took a picture of the architectural juncture then went dark, letting its memory play. More pitter-pats and mirror-receptors firing, I began following her. Soon, in full parkour mode, we jumped to and hung from pipes, running the labyrinth of a 10,000 sq. ft. factory. Pursuing and pursued, perhaps the nature of all quasi-official interactions with strangers in institutional spaces? Waking from a dream into a dream, we made a meta-body continually shifting and re-forming. By the end of fifteen minutes I respected and wondered its animal architecture’s going from a core of perception and expectation to manifestation and back again.

part 1 melded dancers’ and laypersons’ body knowledge towards the malleability of the environment and our movements affects on one another. This conversation reinforced feeling the body as primary, against all metricized forms and demands of life. It spoke of mutuality beyond clubbing, gym and job ergonomics, Ballet, Hip-Hop and Modern. This was Paxton’s “little dance” full grown, Contact not necessarily contacting, but yes reading the other’s expression and presence into passive/active space and time: affect, behavior and cognition gone wilding.

In part 2, closer’s research of interpersonal democracy was applied to the radicalization of performance and venue –a black box full of circles of people and lights with no designated sight lines or seating. The post one-on-one participant interview from before became a dancer on dancer critique of the solo within the company. This invited the audience to consider movement as choreographic and witness it freshly un-spool as a second solo. Bodies poised with ideas, dancers spun into small groupings following beats and lyrics of gestation, freedom, hubris and loneliness. The last note turned drone, holding them as increasingly trembling statues, then blackout.

Lasting a theatrical eternity, this mortification of flesh caught in time rediscovered itself as a humming and slithering collective. Glimpses of individual forms slowly spawned into a gallop. Fully illuminated they/it began encircling, inviting and corralling us to center stage. Welcomed to the dance with newly re-sensitized bodies, this slap on the ass affirmed even those who would escape with smiling eyes. And then we raved on.