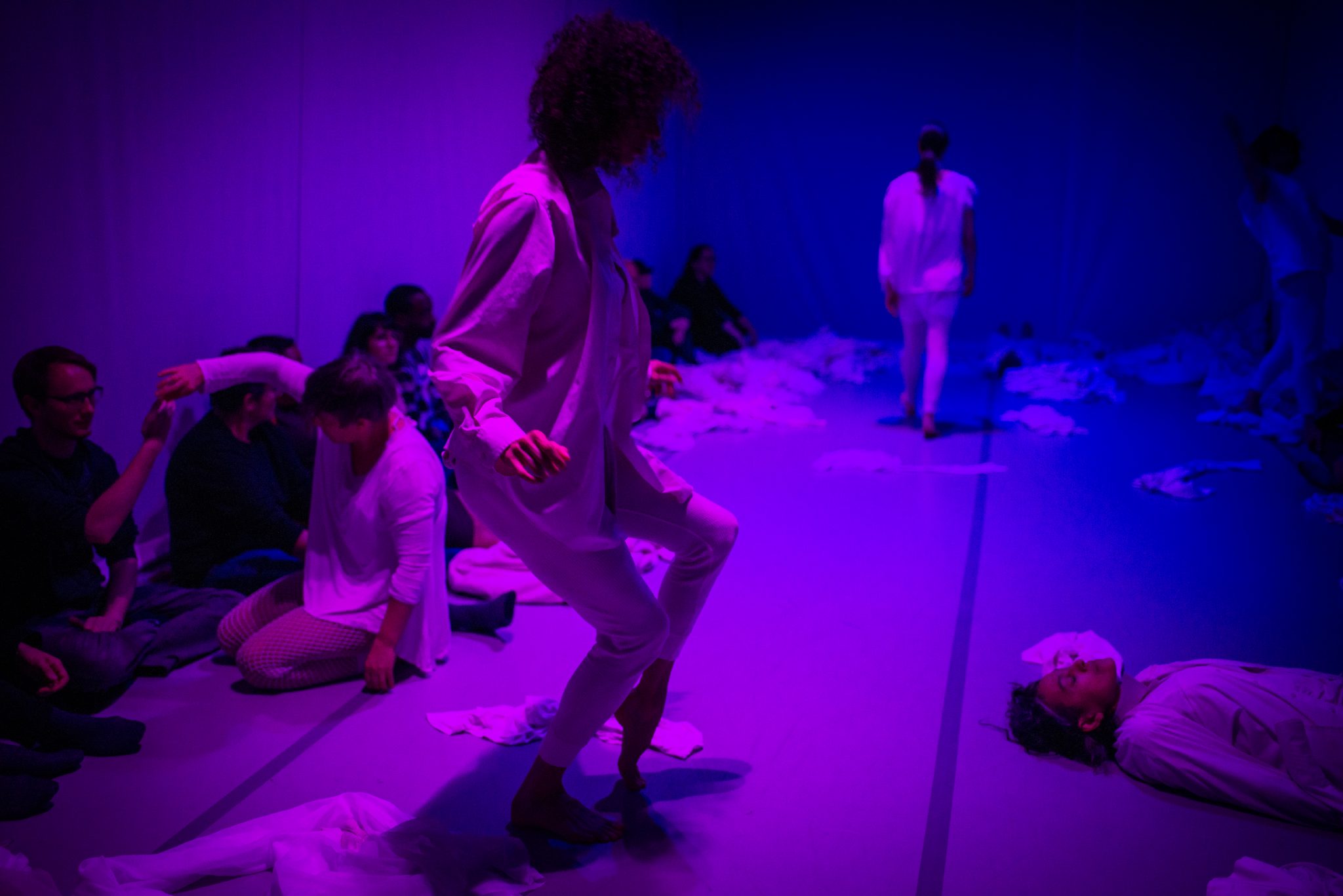 Editors’ Note: We asked the writer and curator James Fleming to attend each of the live moments in the Limited Edition program and create short, visceral responses in conversation with the performances. This is the seventh, written after seeing BodyCartography Project, who performed March 17–18 at SFMOMA.

Dancers process in the background:
Furtive groans the only evidence of convalescence in the heart of the heart of the museum. A religious devotion is given to sound, and final vows are made as weight and volume meld into a single, writhing body. Something touched my leg, then roosted on my foot, eventually became my foot.

Darkness ameliorates as a walled garden.
The lurching viewer makes up a glint-eyed border of foliage, the marginalia marked by muted gasps as dancers heedlessly plunge through darkness into our bodies. Anointed horrors of the imagination take material form, becoming perhaps pleasure.

Absence of light personified (yowling, so shocked at its own absence),
I felt it a part of me rather than a character of the space.

Figures erupt from foliage, momentarily taking the form of epics.
Chronologically arranged events of life and death, where cellular matter, deities, and meaning disintegrate into meandering movements of form and surface.

In the absence of reason, there is simulated beauty.
Flashlight prisms through a mess of melted jolly ranchers, the sheen of Tura’s Spring, their limbs magnanimously fragmented and throbbing.

Vanity of the viewer crusades against a convergence with darkness.
So great was mine I sacrificed symbols: I am a lamb, mid-slaughter, a terror of my body stretched out as maps to expeditions; am meaning spread out and licked up like butter; am unformed as a pomegranate split over the chests of vassals, their faces obfuscated by grimacing sweat-dirt in the killing field embroidered by arrows. So vanity dies.

A graven lilac flashed
(I flung from intestines to crown) as dancers coagulated into a being (the assembly of cells, valkyries): enlightening the garden of the body; reordering felt space; conferring proportion and harmony within a luminous oblivion.

In a space where cultural influence usually dominates alternative aesthetic narratives, pieces of art and passersby became backdrops to our own cartographical truths.

Stairs became Friedrich’s Sea of Ice; viewers, shades of the dead or jutting throngs of ice. Our clasped hands Ariadne’s thread as we walked into existence a labyrinth of interior worlds.

For a moment I saw in her my sister, who had long ago passed away, and when she told me to close my eyes, take her hand, and walk with her through halls our own, I began to cry.

what has been
Otto moved through identities, which were origins, and senses, which became forays into memory
what will be

what has been
a blanket first burdened then embellished him into feathered cloaks, teeth gilded into gold, his arm a horn and on him ears that hear the grass grow
what will be

what has been
reforming light into looping displays of the body, which seem to flicker between authoritarian regimes of nature and the creation and coronation of gods. His body rotating, through cyclical movements as if caught in a surf, from driftwood into a man and back
what will be

Olive to present at the Body-Mind Centering Conference May 2021

Join a dying and decomposing practice May 19th 8pm CET or 2pm EST as part of the Body-Mind Centering Conference. Register here.

Ecosomatic Practices for Living and Dying on a Damaged Earth

Our new work Resisting Extinction will offer practices for grieving and resisting extinction amidst this spiraling ecological devastation. Read more.