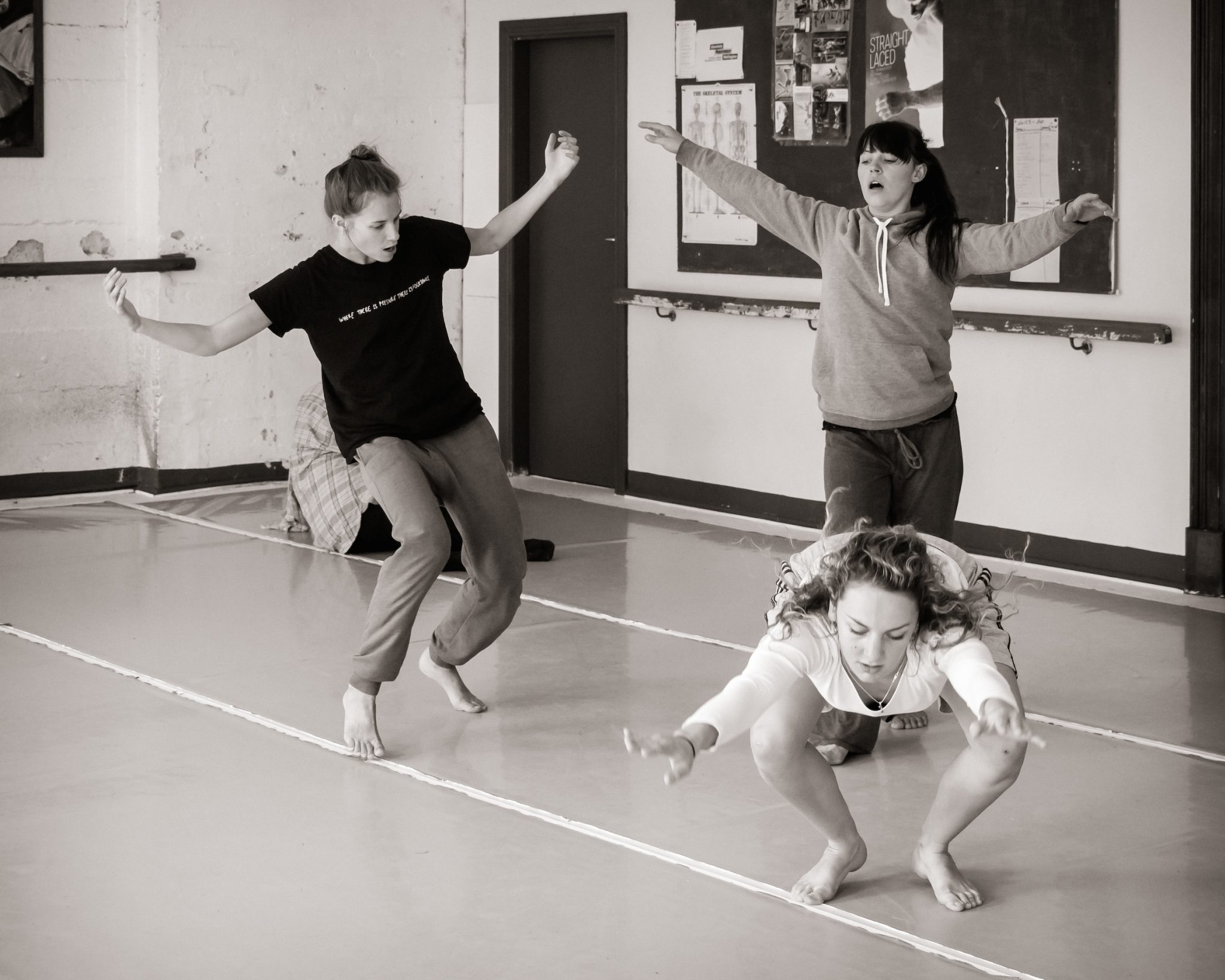 The new Hannah Playhouse opened its doors last night for the first ever Footnote New Zealand Dance NOW season. While this mixed bill format has been run by Footnote for some time, this is its first under the new management structure run by Richard Aindow and its new Artistic Advisory Panel. It is also the first time for the company at Hannah Playhouse for a while (itself a venue under some change) after many years presenting at the State Opera House.

Featured in the lineup are new works by Lyne Pringle and Olive Bieringa with Otto Ramstad (from the BodyCartography Project), as well as an extract from Craig Bary’s Straight Laced. It is fantastic to see such an internationally experienced team working with Footnote, bringing NZ born choreographers who are working overseas an opportunity to return home and share their work with local audiences.

Starting the lineup is Craig Bary’s short piece – entitled Depends On You. It forms a cute ‘overture’ for the evening, providing an abstract section to frame the works that follow. Dancers enter variously, and after some awkward spoken dialogue Olivia McGregor breaks into an exquisite sequence: twisting her limbs into weird articulations, investigating it from various angles, and carrying the tensions of five different bodies in her movements. Manu Reynaud and Footnote newcomer Luigi Vescio also have a wonderful duet that is at the same time tender, competitive, aggressive, and well coordinated. It is possible to see in moments like this the assured nature of Reynaud’s movement, that belies his greater experience. But all the same, newcomers Vescio and Emma Dellabarca bring an exciting and electric new energy into the company.

By contrast with Bary’s work (where interpersonal connections are built like a web across the stage) Lyne Pringle’s Thin Air works with the Footnote ensemble as a unified body, a corps, striding across the stage in baggy work trousers and collared shirts. The music is jangling, confident, and poppy. It is a work that wears its heart on its sleeve, and lays its intentions bare, where the other works are shrouded in ambiguity, abstraction, and impressionism. From the opening extracts from radio interviews in the score, it is clear thatThin Air deals with environmental concerns, further emphasised by the signs pinned to the backs of the performers’ jackets, labeling one as the ‘denialist’, another as the ‘alarmist’, and yet another bearing the inscription ‘business as usual’. It is a contentious addition to the performance language, that brings up questions about how effective didactic signposts like this are on stage, threatening to turn the work into a diagram of its ideas. Pringle’s intentions are noble, and the unison work is very compelling, with the ensemble really throwing themselves into it with beautiful abandon and commitment. However, one is left wondering how dance alone could be used to communicate Pringle’s concern about the environment, sharing this with the audience in this medium, rather than relying on overstated devices in the sound design or costuming to make the connections. Certainly the work undergoes a transformation in its last sequence, where the earthbound figures lose their weight and seem to float from the ground, drifting, gesticulating, sweeping the air, and reaching for something… It is a hard gambit, because this ambiguity alone is bound to let the audience ‘off the hook’, and relieve some of the urgency of Pringle’s message.

The final half of the evening is reserved for Olive Bieringa and Otto Ramstad’s work Low. It is an awkward, frenetic, punky, funky piece of contemporary dance, structured around six or so songs by artists like Peaches, The Roots, PJ Harvey, and the Yeah Yeah Yeahs. Like a badly DJed party or game of musical chairs, there are big lapses between the tracks, which the dancers fill with vague movements before exploding into action when the music recommences.

At times I am reminded of UK dancer Michael Clark’s own dalliances with grungy music, particularly when Emily Adams scrambles around to PJ Harvey, or when Emma Dellabarca bursts on stage in a spangly silver sequined top, thrashing to some upbeat funk. But the greatest praise must go to Olivia Macgregor for the fantastic transformation of her body in this programme: somehow she has managed to tap into something altogether more grotesque in her movements, so ugly it is beautiful, appearing angular, surly, flexible, sleazy, and assured of even the most incongruous of movements. Her entrance echoes Dellabarca’s own appearance, dressed in another sparkling silver top. But Macgregor is slower, more calculated, and precise. Adams seems to have undergone a similar transformation since I last saw her as well, and it is clear that Beiringa and Ramstad’s provocation to make the performance more ‘visceral’ has really been understood by these two dancers.

The whole work itself is a little hard to fathom, with long sections between songs involving unison floorwork and vocalisations that resemble a warm-up or movement workshop for theatre students. The Body-Mind-Centering (c) qualifications of the choreographers are too clear here, indulging a process over the product and the performers’ inner journey over the any reading of the work. This in itself is interesting to me, contrasting as it does with the overtly sexualised, posturing, exhibitionist contortions that explode on stagefor us when a song comes on.

In particular there is a fantastic moment near the end when the dancers lunge towards the audience to the insistent beat of what sounds like an Angolan Hip Hop track. Convulsing like possessed voodoo dancers (watch Buraka Som Sistema’s fantastic video to Sound of Kuduro), the dancers combine the internalised trance-like movement with something frenetic, sweaty, and in-your-face, with the white of the eye rolling and flashing. This movement spills into the auditorium, before returning to the stage with a beautiful string of loose, expansive pirouettes from Vescio. He is quickly followed by the whole cast , as they all spin, hair whirling, keeping their marks on the spot – like dervishes sublimating to something internal again, selfless, and distant.

In documenting these works in this review it is possible to embellish the experience beyond what may appear to be there. However, it is important to note that dance does not impress itself on the senses in the same direct way that words do: or for that matter, a TV advert, music video, or serialised episode. To describe these works in this way risks stripping them of their mystery, their intrigue, and their difficulty.

While it may be frustrating at times, dance like this is not a product, but a process of contemplation or meditation expressed through the language of movement: using the mood swings, textures, patterns, symbols and flavours of the expressive body. It is movement for the sake of movement, and (unlike other familiar kinetic forms of distraction) it doesn’t need an oddly shaped ball to make sense of it; nor is it mime, charades, or sign language. The games that dance plays are more complex than any of these things.

And like rugby, it does not need to be understood, or to have meaning – rather it is enough to follow it, enjoy the technicalities, the athleticism, the frustrations and excitements that build. The rugby ball becomes the proverbial “it” that we either get or we don’t, an idea or meaning passed between the dancers across the space that we are constantly in pursuit of. It may be as simple as an energy that is thrown around the room, a recognisable motif, or a heartbreaking concern about the planet’s well being. In any case it is something that we follow with intent, and as frustrating as contemporary dance can be, there is beauty and risk in this encounter.

Footnote NZ Dance continue to preserve a culture of kinetic literacy in Wellington and New Zealand with bold programmes and guest choreographers like this. I look forward to sitting with them again as they move confidently forward in 2014.