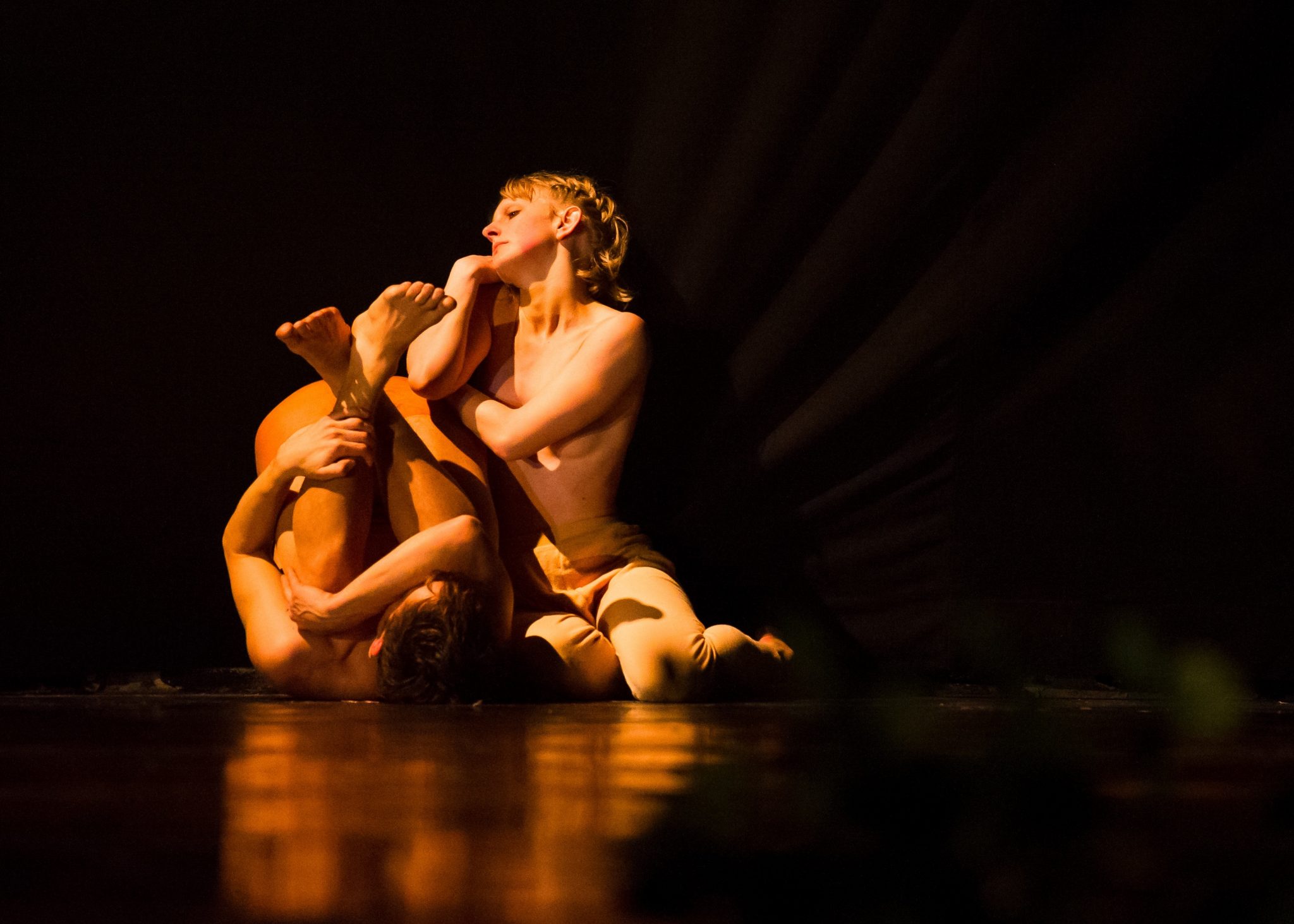 How to Choreograph Empathy

IT’S A FRIDAY AFTERNOON AT THE WALKER. A very thin woman in high-waisted pants is cleaning an enormous, ugly, church-basement-brown card table and chairs with what looks like a Kleenex and recording each minute scrubbing on a clipboard. She could be an artwork herself: Essence of Museum. It’s a sleepy time. The exhibition Lifelike has recently closed. But in one of its abandoned galleries, appropriately, there is some life: site-specific/improvisatory wunderkind BodyCartography have set up an installation, a work in progress for their fall show, Super Nature. The installation is advertised with the tagline “You might hesitate to meet a stranger in a dark alley — but how about a dancer in an empty gallery?”

It’s a hard sell. I watch as a docent tries to entice people in, but two facts — that you have to sign up and that you have to go alone — are sufficient to discourage most. These contravene the usual museum code, in which we can wander and gaze as we please, unseen by the art, unconstrained — within the narrow range of acceptable museum behaviors, that is, but it’s a narrow range that most museum-goers welcome. Even Walker staff members aren’t into it: “I get enough art in my day,” one woman answers.

Apparently, I don’t. My time comes up. Someone beckons me to the entrance.

I go in. There’s a dancer in the room: male, young, doing fairly energetic movement of an artfully spastic style, folding over the outside of his ankle, flapping his elbows, and so on. The room is quite dark and noisy. It’s all a little alarming. I cross to the other side of the room, partly to get a little distance, partly to see what’s over there. Wall, it turns out. It’s a small room. Dark accrues in its corners in a velvety or bloody way — bloody because the sound, an indeterminate whooshing, makes me think I’m inside an organ, maybe a sense organ. There’s something searching about its pulse.

I turn back to the dancer. He’s neither ignoring me nor clearly paying attention. I recognize him now, and I think perhaps he recognizes me. It’s odd to be forced into relation with this person for whom I have no particular feeling. I’m trying to think how such a relation of silence and proximity would occur: Are we lovers? Survivors of a shipwreck? Who would be without the recourse of words? For words are the one thing that feels forbidden here.

It’s becoming strange to look at him; he’s looking right back. He’s quieted and it’s brighter. Is his changed body language in response to me? I lift one shoulder. He mirrors. So, I suppose the way he’s holding his body, that tension about his upper ribs, that’s what my posture shows him. Fine: I’m nervous, not feeling well. But I want to resist this dynamic of health and unhealth. We’re doing a little dance now, trading leading and following, but it bores me; that is, it’s a boring dance, or maybe what I mean is that it’s boring to be dancing, to be in a game I’ve played before. I sense he’s waiting on me and I’ve already scraped the bottom of my resources. I walk off. Maybe I’m touching the wall. We have to find something else to do, he and I.

But then the curtain lifts and my ten minutes are over.

I can see how this experience would not be for everyone: It’s intense. Or maybe the right word is dense: I’m vividly aware of my choices, of the branching paths of the possible spiraling off in every direction. This is exhausting and simultaneously addictive. When my time in the installation is over, I hang around the gallery for a while, as if I might catch a repeat. My excuse is that I want to interview another “viewer,” but then I let the next woman slip away. Is it my imagination or did she have a little smile on her face? Maybe I don’t really want to talk about it at all. What could anyone tell me? I saw the back of my own head; there’s no mystery.

You’re getting on a bus. You silently signal to the other passengers: Yes, I am in charge of my belongings; yes, I know where I’m going; no, I don’t want to talk to you; no, I’m not afraid of you, don’t think you can mess with me. If you’re a city-dweller, you’re adept at sending all these signals — a particular grip on your bag (firm but not too tight), quick and efficient movements, purposeful aiming of the eyes and head. You’re expert at calculated hostility.

But what if the relation were different: What if you needed to say, without words, I want to help, I’m trying to understand, hello my name is ___? It’s not so easy as you might think to open your body’s language to a stranger.

It’s odd to be forced into relation with this person for whom I have no particular feeling. How would such a relation of silence and proximity occur: Are we lovers? Survivors of a shipwreck? Who is to be without the recourse of words? For words are the one thing that feels forbidden here.

ANOTHER DAY. This time I don’t know the performer: a black woman, older. The relation is instantly different: She doesn’t present herself to me, doesn’t convey that same shiny practiced pseudo-indifference to my gaze. I feel that I have stepped into her space. I have to look at her — I can’t ignore her — but I don’t want her to think I think I can just look with impunity. I must demonstrate my intentions somehow. At a loss, I fold myself up to kneel in a corner, indirectly facing her, looking up at her. In the dark, it’s hard to tell whether she sees me, but then, after some millisecond of inattention, I realize she’s looking at me quite intently from under her brows, her eyes glittering, her mouth a little open. The possibility of menace briefly arises. Then we are in relation. She’s still dancing, side-to-side jagged steps, as if she’s trying to erase her tracks as she goes. I lean forward — not avidly, I hope, but with interest, and more than polite interest. I’m trying to convey that I am willing for this moment to be important. I’m aware of the paucity of my resources for conveying this, though; I don’t have the signs for I’m taking this seriously, for Show me what you want to show me.

I copy her gestures — she keeps one hand crimped up, curled into a fist, while the other makes elegant calligraphy in air. She sees. I unfold my crimped hand. She doesn’t mirror me. I wonder what this is for her, to what extent she’s prepared for me. Then she’s smiling, almost laughing, soundlessly. What have I done to create that? Is it mocking? Is it a gambit? Then the smile is gone. Her jewelry shimmers in the dark; I’m aware of my own. Again it seems odd not to have speech to fall back on, but at the same time I have no idea what I would say. I’m still in the corner, kneeling, leaning forward. She’s looking at me intently; as if unconsciously, her clenched hand loosens.

The curtain lifts. My ten minutes are over. What did the docent make of what she briefly saw? It dawns on me that someone is probably watching all the time. The prospect of freedom from scrutiny is welcome, but I don’t quite want to leave the dancer. We’ve had an experience, or at least I think we have — I know I have — and some acknowledgement would feel right. But she’s already facing another direction, free of me.

After, I wait around under the excuse that I want to talk to someone else. Walker performing arts curator Philip Bither goes in, comes out, and is instantly absorbed in conversation with a couple who bring up Yoko Ono’s Cut Piece. I see the connection but it’s pretty thin, and it depresses me somehow that these people already have a way to deal with an artwork they haven’t experienced. I am feeling very undefended, myself. A girl comes out, maybe twelve, and I interview her, but she can’t tell me that much about what happened. She danced a little with the dancer, she says. Her face remains curiously blank, or maybe guardedly blank; she’s the age where nothing is neutral and everything is secret. I get the feeling she and I have had a similar experience, but I can’t get at it through words.

Outside, kids are running around on a green hill. Five boulders in a tight ring, their facing sides painted different metallic brights, appear to be having a conversation; the kids are immune. They’re running after Frisbees, or not Frisbees, but art objects that trace unpredictable arcs in the air. Dashing around under them, the kids try to guess at their mysterious trajectories.