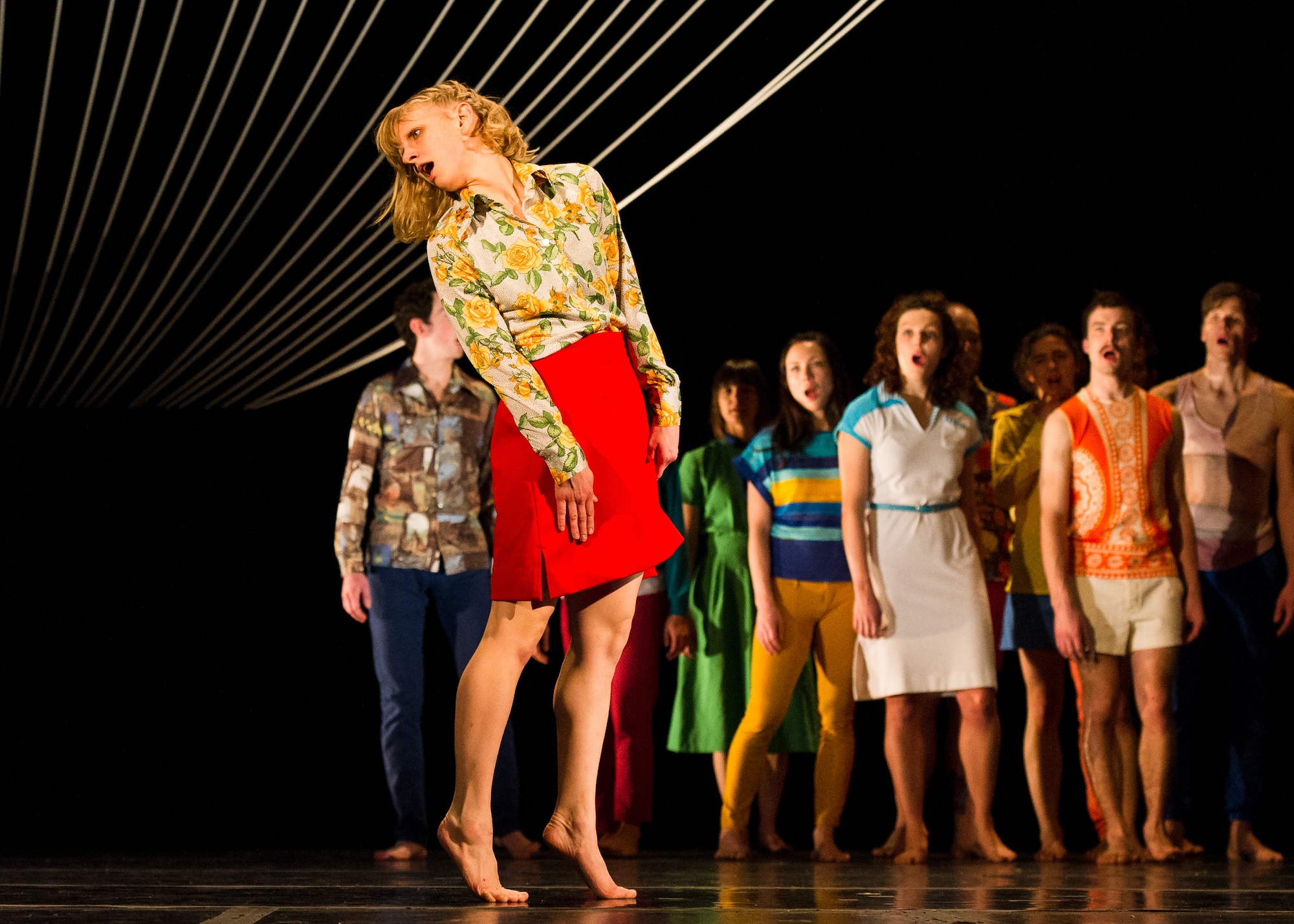 I promise I am not late – the house lights are up and the performance has not formally begun. And yet, the audience is dead silent as the auditorium slowly fills up for this evening’s performance of Super Nature, a collaboration between the Minneapolis-based dance troupe BodyCartography Project and the luminary composer/harpist Zeena Parkins, presented here as part of no less than two festivals: COIL ’13 and American Realness. Back to the audience: apparently, we are all transfixed by the sight of nearly 20 performers occupying the left corner of the proscenium frame, which is practically bare, save for an array of ropes hanging from the ceiling, and neatly bunched up behind a curtain upstage. These men and women look like slightly oddball versions of Williamsburg hipsters (reviewer’s note: since this is an international publication, it might be worth noting that Williamsburg is the widely-considered coolest part of Brooklyn). They are completely silent, mostly keeping to themselves, and yet the gentle sway that is rippling through their bodies seems very much in-sync: watching them feels like staring at an easygoing school of fish in a large aquarium.

The troupe cleverly lulls us into this feeling of quietness and harmony, along with supposedly recognizable characters on the stage as the evening’s performance takes off: aside for these first few minutes, they continue to pull the proverbial rug from under the spectators’ feet, to a largely disorienting effect. As a matter of fact, no sooner than another female performer chaotically stumbles her way down the aisle, does the show careen into some rather unfamiliar waters, and never comes back. In stark contrast to the contained movement of the ensemble, this surprise soloist slowly infects the onstage crowd with angularity and disjointedness. And indeed, as the show progresses (after this first intervention, the chorus leaves the stage and the main cast of seven performers remains throughout), the dynamic that is established is that of leaders versus followers. In a way, for much of the first half of the performance, at some point of another, a single dancer emerges as an “alpha”, whose movement quality ends up dictating the movements of the rest of the ensemble. In spite of their oddity, each one of them seems to be endowed with something unique, and with that quality they possess the crowd, until uniqueness becomes the norm.

Some half way into Super Nature, my guest leans over and asks me whether I know what these strange goings-on are all about. (He really wanted to be mentioned in the review – so there you go.) Why yes, I believe I do have an answer. This piece seems to investigate human behavior, specifically group dynamics, and – I believe – draws the audience towards the bigger historical picture by observing our evolutionary patterns. As the images and sounds of the show (Parkins’ minimal interventions are gorgeously evocative) wash over me, I have the impression of fast-forwarding backwards in time: before I know it, I find myself watching a scene from the Garden of Eden, with performers having shed their hipster clothing and being (mostly) in the nude holding branches and surrounding a tumbling pair engaged in some form of the original sin. Next, the real sounds of rustling leaves are heard from the mezzanine, and the movement by now is no longer human, but rather evocative of the primates. And as the piece rewinds its way into primordial times, the stage plunges in semi-darkness and clouds of smoke as various blob-like formations are seen rolling around, and the cords hanging from the ceiling are finally released, like strands of DNA running amock. Blackout.

Super Nature was not particularly focused on choreography in the conventional sense of the word, or on virtuosic dancing – though there is a great deal of talent on display here – rather, it is a research project investigating group dynamics, hereditary traits and organic movement qualities. It is definitely one of the oddest works I have seen this season, which is not to say that it didn’t give me (and my evening’s companions) some whimsical thrills and food for thought. And really, how can you not admire the effort of somehow mixing together hipsters, Adam and Eve, and primordial blob and making it all come together somehow?

Learn more about the teaterfestival

Otto Ramstad will present “A study in anarchy. A study in gravity” as part of INTERIOR TECHNIQUES STUDIES. SEMINAR ABOUT STEVE PAXTON from April 24, 2020 to April 25, 2020 in Bilbao. Read more

We are very excited to announce the first Body-Mind Centering® Somatic Movement Educator program in Australia has begun. Our second module will unfold with the Organ System and Basic Neurocellular Patterns February 14-March 2, 2020 with teachers Amy Mathews, Mary-Lou Seereiter and Olive Bieringa.  You can learn more about the program here.