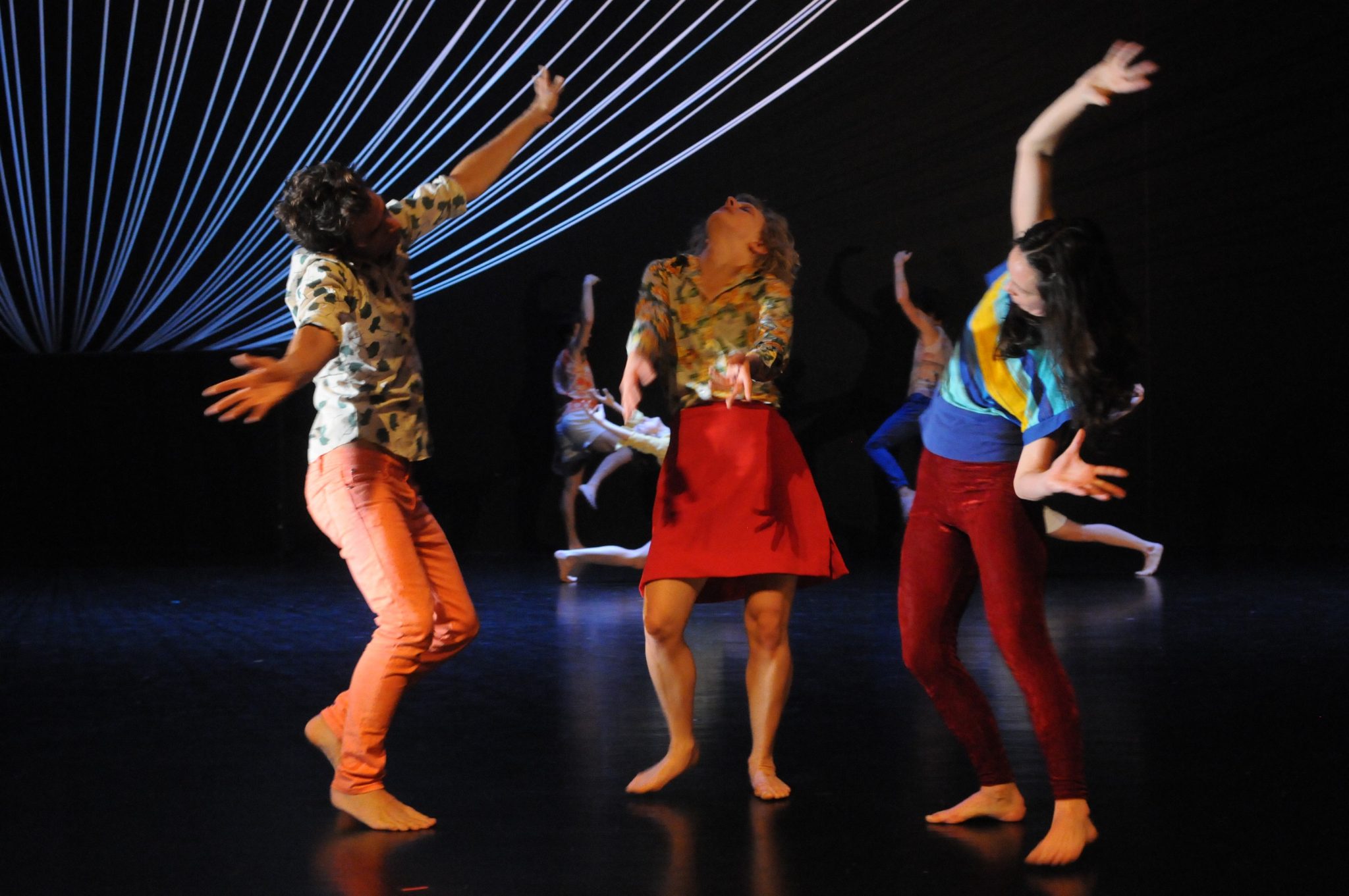 “And all I gotta do is act naturally.” — written by Johnny Russell and Voni Morrison, sung by Buck Owens, the Beatles, and many others

What are our animal spirits and did Keynes misuse the phrase when he famously employed it in his 1936 greatest hit of economics, The General Theory of Employment, Interest and Money? He meant, essentially, the instinctual human avarice and greed submerged below yet driving all social behavior by humans. But BodyCartography Project’s Super Nature turned toward a far more ecological perspective on the inner workings (at one point quite literally the innards) of the animalistic. Co-directed by Olive Bieringa and Otto Ramstad, set to a fabulously weird harp-meets-blender score by Zeena Perkins, and featuring Minneapolis-based dancers Justin Jones, Timmy Wagner, Emily Johnson, Anna Shogren, Otto Ramstad, Francesca Mattavelli, and Sam Johnson along with a few Chicago guests, the piece strived to grasp what we might call the viscera at the heart of the visceral: the meat and bones, blood and breath, convulsions and nerves that allow us to both transit between and transgress across the lines between the human and the animal.

There was an interest here in the archaic and elemental, in animal myths and Ovid-like metamorphoses, in the animistic as well as the animalistic. The dancers began by positioning themselves on the street and in the lobby as one entered the Storefront Theater. They blended in—just a few more hipsters among the hipsters in the culture of dance-goers—until one suddenly stared at an audience member zombie-like or bent a foot and leg over the railing leading up to the balcony. It was weird, uncanny, and it was supposed to be, slowly bringing us from the cultural space of the Cultural Center to a different world, one that was of us, but also beyond us, wilder than the social norms of the art event.

Once inside the theater, a herd of dancers gently bent into and out of one another under a set of ropes hanging from the rafters. They were strange, but still social and human until suddenly dancers started emerging from seats in the audience, unsettlingly tumbling down stairs, convulsing and twisting as if being shocked, out of place and pulling us into their disorientations. A female dancer sprang up from an audience seat, throwing off her jacket and shoes and began to breathe. The dancers on stage started following her breath patterns in a kind of collective dance of the diaphragms, literally making the air stand still and move, stand still and move, with their lungs. It was a startling kind of call and response of oxygen and its denial, a basic act of ecological realities that we forget to think about in our daily lives. Us mammals, at least, all need air to breath. Yet it was also an act of cultural description: in nature, as in the theater, we sometimes all collectively hold our breath. The ecological wilds and the wildness of highly-cultured, avant-garde dance met.

The group then broke apart into a series of solos, duets, and group set pieces. Individual dancers became snarling attack dogs, two-bodied loping giraffes, reptiles, squawking birds, and other creatures half-recognizable. They were trickster figures: humans that were animals that were humans again. The always wonderful Emily Johnson seemed to transform herself into a dainty, balletic gazelle or deer, dancing just for herself then pulling the other dancers around her, ignoring them yet taunting them, entrancing them yet angering them, ethereal yet carnal, full of base desires spun into circles and spirals of grace that contrasted to the Butoh-like language of stillness and spasm that the other dancers so often pursued.

Then there was the requisite dry-ice smoke and semi-nude dancing holding tree limbs. Well, all of these kinds of dances have to have it I suppose. But the most striking moments came at the end of the piece, when two dancers crept under large blankets that became the hides of large beasts. As they moved, the dancer was still there, under cover, but the animal sprang to life too, all rippling skin of muscle and fat, hair and bone. These blanket-dancer-beasts were eventually eaten by a pack of predators and a following wave of scavengers. A spotlight cast on one dancer’s body showed the entrails of this great beast slowly turned to skeletal remains.

It was, as the co-directors readily admitted of their piece, rather melodramatic. But Super Nature also worked its magic by asking us to imagine a “radical ecology” at once archaic and futuristic, elementary and yet quite sophisticated. The performance did something that dance as a corporeal, embodied yet also highly symbolic and evocative art form is particularly good at doing: it cast a spotlight on the animalistic as at once artifice and edifice, something implacably beyond human agency yet also shaping it, something beyond yet also in our bodies, something we leave our human identities behind to ascertain but can only do so through our human apparatuses of perception and comprehension. The dance presented the animal as something other—out there—that was also fundamentally a part of the human—right here in the dance. The animalistic became a monstrous phantom, a projection, a fantasy that was also an intimate essence.

Here was a deeply intellectual experience of consciousness conveyed through physicality. These dancers used their bodies to invoked the animal spirits as they described a logic they discerned in the ecological. But in doing so, they also suggested, whether consciously or not, that we always must access this logic through the cultural. The dancer became a bear, but the bear also became a human dancer. There were no more masks, at least for a moment, and the logic of the human-animal binary grew omnidirectional and multifaceted instead of dichotomous or unified. We were poised at the moment where the animal spirits at once arrive and depart, are fashioned by human imagination and action yet also override logics, whether economic, cultural, or even ecological.

Across the synapses between sensation and thought, the animal and the human, the ecological and illogical, the participants in Super Nature roared, howled, tingled, and leapt, flinging themselves over to feel out the distance and, for a moment, close the gap between the animal spirits and what it means to act naturally.

We have launched a new conversation series for dance and performance makers who have been creating and performing for intimate audiences in public space. Check out the documentation from our first conversations and stay tuned for more.

Material for the Spine with Otto Ramstad

We are very excited to announce the first Body-Mind Centering® Somatic Movement Educator program in Australia has begun. Our third module (yes our fingers are crossed)  will unfold in September 2020.  You can learn more about the program here.