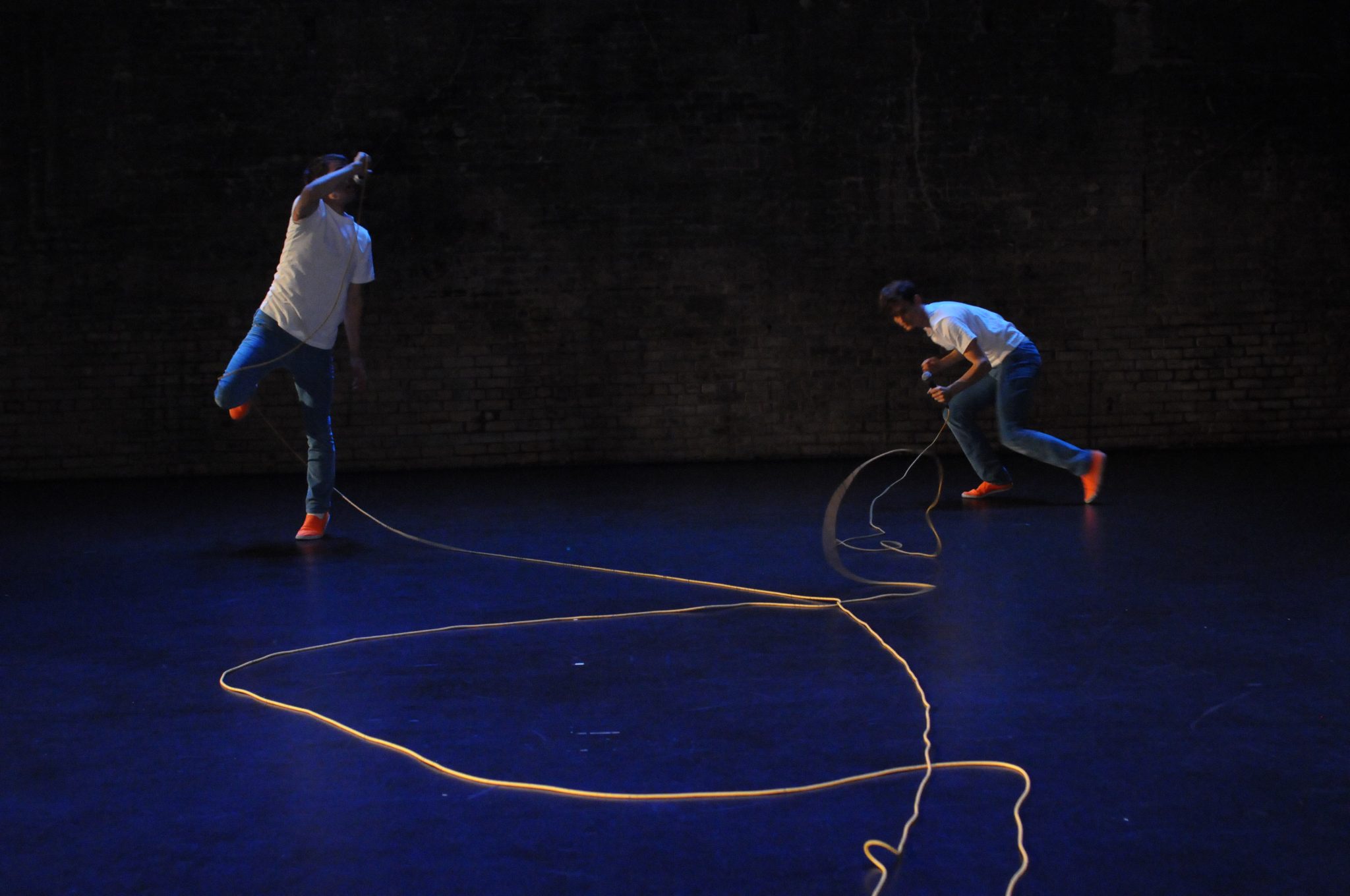 Sometimes I feel like I’ve been going about this arts writing thing all wrong. When I write a preview, I interview the artists and they tell me what the show is about, usually before I see any of it. Or I write a review, with the standard protocol that I don’t speak to the artists. I’ve seen BC perform twice now, (I reviewed 1/2 Life last winter) and both times I had so many questions it just seemed silly to write a review without talking to BC before I wrote anything. But that is what I’m going to do this time, as I’m turning this article in tonight.

Let’s start from the beginning. In the beginning there is a blank set, with paper lined all along the floor and back wall. Emmett Ramstad enters, wearing turquoise corduroys and a white t-shirt. There is silence. The dancer creates shapes; gestural poses that are sort of architectural but at the same time have casualness about them.

The first noise we hear is that of Emmett’s brother, Otto, fumbling with a microphone. He comes down stage, dressed identically to Emmett. Eventually, there is sound; eventually, the two siblings begin to move together. The movements continue to be very gestural, creating sculptures. The soundscape, created by Andrea Parkins, utilizes sound effects that harken to a 1940s radio show. I kept thinking as I was watching the performance: Is this a piece about gender? I’m watching two dancers, dressed exactly alike. They look very similar. They are not the same gender. I feel the need to ask questions. And then I question my desire to know. Maybe gender isn’t what the piece is about at all. And even if it is, or at least part of what it’s about, why do I have to know the specifics of the individual artists?

In much of the press material for the show, Emmett and Otto are called twins. In the second program, not the regular one but the folded up one with an abstract line drawing on the back that rested on the seats as the audience walked into the theatre, there are a number of different narratives about the two siblings. The program cites a Scientific American article titled “Rhyzozygotic Twins Beat the Frozen Odds” which states that Emmett and Otto exemplify a rare form of twin enabled by “the wonders of assisted reproductive technology.” In another explanation, titled “Otto and Emmett Ramstad, A Biography,” the twins are said to have been born in a blizzard in Norway that wiped out all the power in the entire country, describing how the two young babies were separated at birth. There are other explanations as well.

Eventually, spoken text is introduced into the performance. Using microphones, the performers would describe thoughts and actions. I wasn’t quite sure if they were supposed to be describing their own thoughts and actions, or that of the other person. Often, the text and actions didn’t necessarily line up. “He backed up and then he turned,” one would say, though that action wasn’t happening. Sometimes the text and actions would line up, as when one described the other as melting into the floor, while the other did appearing to be doing just that. As the two performers spoke into the microphones, the microphones’ cords would be used to create interesting shapes and designs along the floor. The performers intentionally manipulated them, at one point creating waves with them, which to me signified a cardiograph. The sounds of the microphones being handled were also a part of the sound design.

I won’t tell you about the ending, because I think you should see it. I’ll tell you it’s very cool. You may not know what the message is. I don’t think there really is a message. But it’s a stirring piece, viscerally, and you’ll be thinking about it afterwards, as I am now.