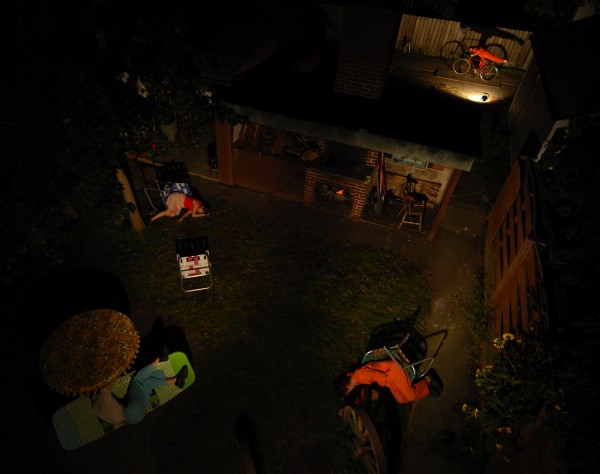 There’s a lot to be said about BodyCartography’s remount of its 2006 Momentum show, this time staged in the holiday house itself—the duo’s own south Minneapolis home.

First, though, some background: BodyCartography (Olive Bieringa and Otto Ramstad) is a pioneer in the newly exploding field of dance film. Bieringa and Ramstad pursue a space-based, improvisational, and visually acute version of dance film, meaning that they don’t make a dance and then film it, but rather explore the space through movement, then cut and splice these improvisations together. This same process is active in their live work: what you see is improv within set limits, with certain set moments that themselves most likely arose from improv.

Why does it matter? Because what you see is at once brilliantly planned—lighting, angles, perspectives clear as cinema—and breakneck.

First, that cinema. Early on, you stand on the lawn, looking toward a side patio, but also up at the corner of the large old house. Bright maroon, with stained-glass details, the house juts out as if in an early scene from a horror film. Meanwhile, on the patio, someone is moving, limbs flailing, lit by tiny star lights.

Initially, it’s a bit frustrating to get only glimpses of movement, but then you begin to feel the pleasure of these stolen moments: a woman jumping on a mattress in a royal blue room, giggling, while another woman hovers, mostly out of sight. The performance ends in the alley behind the house, where projections and live dancers interact. At times the dancers run all the way to the end of the alley and you watch them jerking and jumping from a long way off; this isn’t a view you can get in the theater. Instead of the theater’s flatness, Holiday House has the three-dimensional grasp of reality—albeit a beautifully lit and planned reality. At one point a curious neighbor, not a performer, came around the side of one garage: transfixed by light, he became a performer. The pleasure of viewing is so intense here, so fun as to be nearly guilty.

Then there’s the dancing itself. The perspectives from which we view are planned, but the movement feels dangerously unhinged. Morgan Thorson and Otto Ramstad throw each other around within inches of the audience; Kristin Van Loon crashes her bike into every impediment she can find; three dancers fall to their knees over and over again. Outside the confines of a theater, within a house, where people generally follow certain proscribed paths, all this virtuoso flight feels especially and thrillingly risky. It’s as if BodyCartography and their dancers have just now discovered this house and are exploring it with no notion of its use or purpose.

In fact, the house, which is truly an odd one, seems increasingly bizarre as the performance goes on. Each space, each object morphs as the performers “misuse” it. Also, as you are led from room to room, some performers remain behind, lying or dancing, which gives the house a haunted feel.

But it’s difficult to say who’s haunting—you or the performers, who seem unaware of the audience. The wrongness of being in a strange house, watching its inhabitants as they enact their strange exploration—again, it’s a guilty pleasure, a thrilling risk. (There’s some literal risk here too. Holiday House #2 is only for those who feel comfortable ascending and descending strange staircases in near darkness. And don’t even think of wearing heels.)

One thing’s for sure: your own home will never feel so dull as when you return from BodyCartography’s Holiday House.