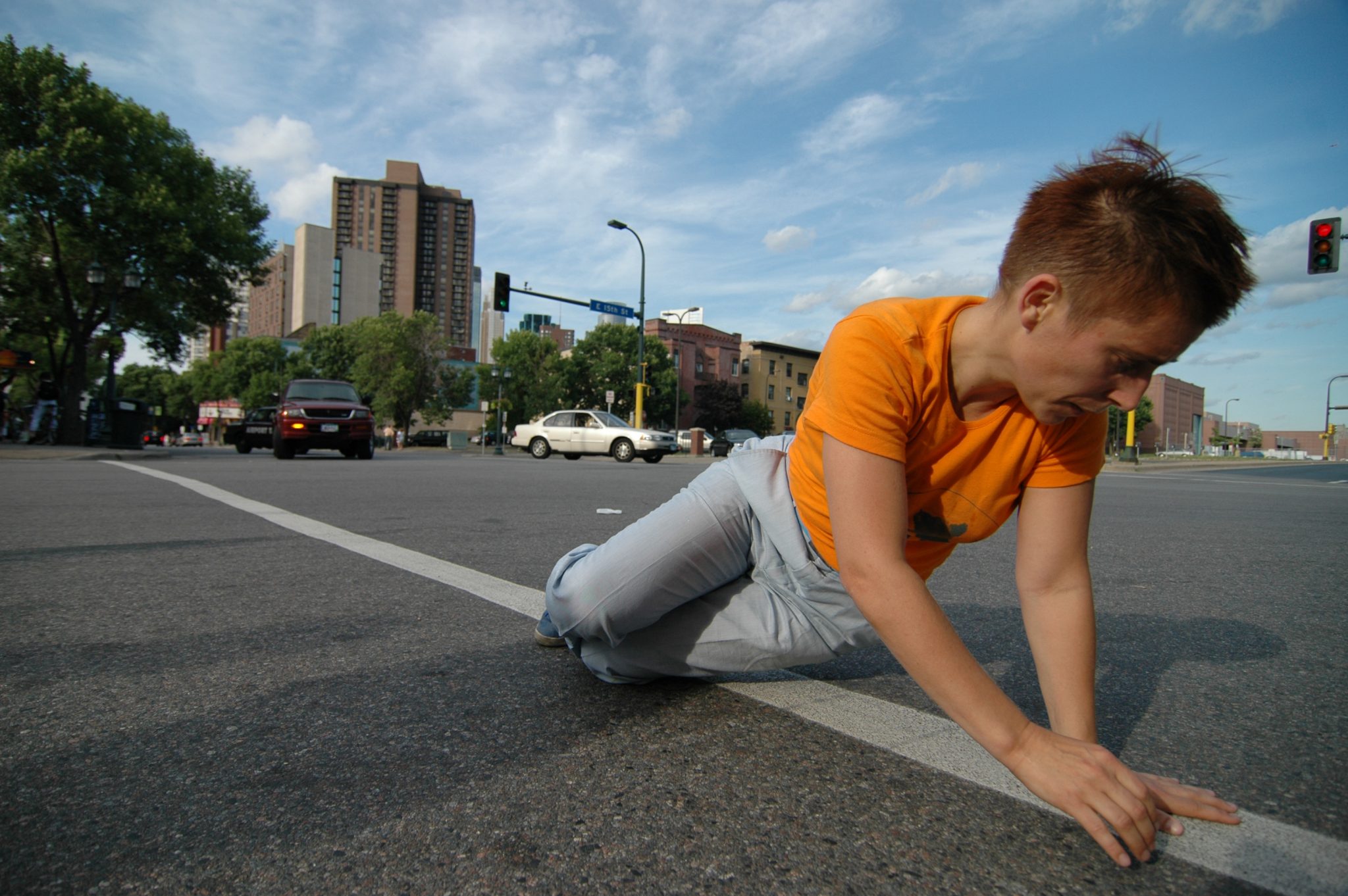 Between Landscape, Self and Other

Home » Press » Press Archive » Between Landscape, Self and Other

Olive Bieringa and Otto Ramstad’s BodyCartography Project has played an important role in the New Zealand improvisation community, through their regular visits here for the development of award winning site specific performances for the Wellington Fringe Festival, a dance film project and many workshops for educational institutions, the public and the Nelson Lakes Contact Improvisation Retreat. Their unique combination of contact improvisation, performance improvisation, tuning scores, Body-Mind Centering©, site specific investigation and performance have influenced improvisation practitioners throughout the country, as we tune into moving through the landscape, and allow our landscape to move us.

Making work in the public realm
In 1997-98 whilst living in both San Francisco and New Zealand, I became interested in how somatic, perceptual and improvisational practices can interface with an audience beyond the improvisational/somatic dance ghetto and how I can interface with a world in which I am not the center of the universe. In working in urban/wild landscapes dance makes a new sense. The dance dialogue between self, other and environment has an inherent logic and implications beyond the metaphorical in terms of how we relate to others and the environments we move through and live in.

Affecting a larger politic
I see the work of BodyCartography in public spaces as provocative rather than confrontational. In public space the audience has the liberty to walk away whenever they want. In eight years of making work in public spaces across the USA, and other parts of the world I have experienced very little aggression. We often have a bridge person, sometimes undercover, whose role it is to engage individual audience members in dialogue and reverse their question, “what is this?” with “what do you see?” As audience, as experiencers of culture we all generate meaning all the time. Often we don’t value these meanings. BodyCartography is not creating political theater but our work is irrefutably political in its act of reclaiming public space; spaces which are often choked with consumerism, fear or intimidation. Engaging people in a kinesthetic experience. Providing opportunities for people to value their bodies. Understanding the causal effect our actions have on others, whole communities and the environment. Each thing we do is of consequence to the world.

Finding Meaning
My new solo GO is providing a vehicle for me to spend physical and performative time with all kinds of people in an urban context. This improvised solo takes place along a street on a predetermined route for a very small, ideally invisible audience. As I dance who do I meet? Who is the most open to interacting with me and interested in what I am doing? The guy who accepts and eats my partially eaten Wendy’s hamburger . Who are the people that don’t want to be seen but are highly visible? Questions of class, race and otherness surface. I have the privilege of being white and can therefore choose my invisibility. As one African American witness commented: “Man, I just scratch my nuts and they take me to jail. What do you clowns think you’re doing?” It is a delicate improvisational score. I do not rehearse. Before I perform I ask the local business owners whether as part of the performance I can enter their store. Many are fearful. Some embrace the idea fully like the African American barber who asked me what kind of music I would want him to play. If I keep performing this movement conversation on the same street over time how will these relationships evolve and change? This work is less about my dancing and more about creating containers for people to see the street and reveal the life of what is already there.

On American Culture
Americans in general are preoccupied and passive. People are struggling financially and feel disempowered, as our voices are not heard. Both individuals and organizations are far less willing to stick their neck out, have their voices heard, their bodies seen. People are hiding to protect what they have got and pretending that the system will come right. I think there is a huge amount of denial happening. Have we given up on hope? I hope not? But we have to keep engaging…putting ourselves, our voices, our bodies out into the world speaking what matters to us.

Notes On Dry Wash
The sun rises on ascending pile of rocks illuminating them bright orange. A body appears as if cleaved from rock leaving a small hole of sky in the place her body had been. Bodies are scattered over a distance of fifty yards behind creosote bushes, under a tree or out in the harsh early morning light. The camera moves through the landscape slowly rediscovering bodies over and over or in fast motion speeding roughly through the vegetation across the sand as the bodies compose themselves in order to walk out of frame. This is the opening of a thirty minute film that investigates the bodies relationship to the sonic, physical and social landscapes of Joshua Tree National Park in California. Taking an improvisational approach to pursue both the creation of a dance and a domestic language born of desert living.

How we make our work is in direct response to the environments we work in. The selection of cast, costumes color, camera style and shooting duration are identified before we arrive. Possible images and material is discussed but nothing is choreographed until we immerse ourselves in the landscape. From here, this place, the space in between our bodies and the environment, the interstitial place, the material evolves. We invite performers’ animal-like appetites and childlike curiosities for physical investigation through engagement of their sensorial body. Motivated by ecological issues we place our bodies in direct relationship to the world highlighting our interdependence on its fragile ecosystems.

Through the duration of the film we are exposed to a larger and larger group of people. This community or tribe grows like a blue river through this dry landscape. Many of these people are in the film due to an open call to the vast West Coast improvising dance community to come for one day to the desert and engage in the action as a way to build community through the work. There is little separation between the content and the process of our work. Both are of value and reflect each other directly. It is no longer the art object that is of value but the process it initiates. The atmosphere it generates. Aside from the memory of the film crew, the film will live on as an experience held in the mind’s eye of the watcher not as isolated object forgotten on a shelf. Dry Wash plays between rough cowboy arrogance and a fluid multiplicity that has we hope the potential to provoke a magical, mythological state in its viewers. It is a practice in generating entrainment if not “re-enchantment of the world”.